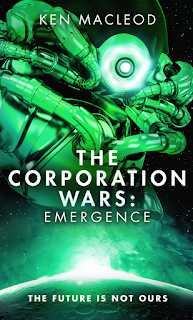 Before I say anything about the book itself, just take a moment to admire that utterly gorgeous cover image by Bekki Guyatt. I know one shouldn't judge a book by the cover but sometimes it's hard not to...

It's a bit tricky reviewing anyway the third volume of a trilogy. Realistically, those who've read the earlier books are likely just to want to know "is it as good as the others?" the answer to which is, "yes, in fact slightly better". Those who haven't read them will want to know if they should do that now, the answer to which again is, yes, and shame on you if you haven't, where have you BEEN?

They also rightly want to avoid spoilers which means they shouldn't really read any more of this review, they should go and read Dissidence and Insurgence first.

All that said, though, this is still very much a book in its own right and, given how the trilogy has evolved, somewhat different to the others. So I would like to discuss it even if I've now excluded most feasible readers.

What's different is that by the time we come to Emergence, the veil of the Temple has, as it were, been rent in twain. The Wizard is in plain sight. What was obscure, if gradually being revealed, through the earlier books, is now plan and we no longer see as through a glass darkly.

We know that those old enemies from 21st century Earth, the Axle and the Rax (progressive and reactionary terrorist forces) both digitized ex-members who've ended up a far exosolar system, embodied in sims operated by the various AI-driven Corporations.

We've gradually seen a complex skein of allegiances, bluffs, double-bluffs and plots fall away, and there's a bit of clarity. The Rax - dedicated fascists all - have coalesced and are making a bid for power. We know that the robots sent to exploit the local moons by the Corporations have developed sentience and rebelled. We know that the elaborate worlds occupied part of the time by Carlos and his comrades are simply sims - and that they are likely, at any moment, to be downloaded into squat fighting frames, like digital Orcs, to battle the robots, or the Rax, or other factions. And we know a lot more that I won't attempt to precis.

What we know less about - and a fair bit of this book fills this gap - is the nature of the planet itself, and of the life upon it. Which gives MacLeod something new to address, besides the dry wit of the robots or the dynamics of space battles. That opens up the story considerably - at the end of the previous book, the Locke module, with digital Taransay Rizzi aboard, was plunging towards the surface. What she finds there, and how it affects the complex, many sided conflict brewing above, is one of the more surprising elements to this book. MacLeod evokes well the wonder of the new planet and its weird biology, and sets up a new conflict which rebounds on the schemes of the other actors, war-game them how they will.

It's a strange though that the utterly alien but biological life there is the first non-digital life that we've encountered in this trilogy. That fact becomes more and more important as the schemes unwind, the balance of power shifts and the final secrets are revealed (but not till, almost, the final page).

This has been a superb trilogy, and the writing remains fresh to the end. There's the degree of expression that MacLeod manages to give to the robots, with their deadpan remarks and utterly convincing robotic quirks (for example, the danger of two or more getting stuck in a loop of logic, which requires the intervention of a third robot to close down). In this book we see what's effectively a robot strike, complete with strikebreakers (who receive a fair amount of abuse). There's also a lot of twisted economics "The price of your souls is tending towards zero") and law (the battles are fought as much by AI-mediated lawsuits as by bullets and lasers). And I could go on.

In short, Emergence is a logically and emotionally satisfying conclusion to a smart and thought provoking trilogy which not only looks back to the troubles of the present (those mountains of bones on Mediterranean beaches) but looks to the future - that future which, as the cover has it, it not ours.


For more about the book see here.