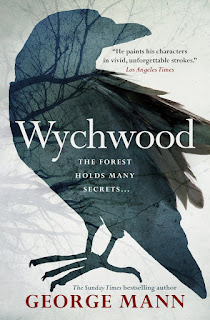 Early in the book, we see a woman fleeing for her life through the eponymous wood (a real feature of Oxfordshire). Then, we're introduced to Elspeth Reeves, a returning native who's back from the Big City after losing her job and breaking up with her boyfriend. Elspeth is a journalist, and when she finds there has been a murder in the woods behind her mother's house, she can't but become involved. She wants to know more, but also sees a chance to get back in the game. And perhaps to put thoughts of the ex behind her.

And then there's childhood friend DS Peter Shaw who's now on the case - and in whom Elspeth develops a more personal interest.

This is a well plotted and involving horror mystery which treads a fine line between detective fiction and supernatural horror. Mann mostly stays in the territory of the former, allowing for a fairly conventional investigation of the murders (of course, there are more murders). Having said that, Elspeth spots early on that the killings seem to conform to the medieval myth of the Carrion King, a kind of magic-using Robin Hood figure from the ninth century. So the question is whether the murders are the work of a serial killer inspired by that story, or whether something more is in play?

This question runs through most of the narrative, as we meet potential suspects who are knowledgeable about the Carrion King as well as the members of a theatre group performing a play based on the myth. Throughout this, Elspeth investigates the case in parallel with Peter. It is refreshing that there's no - or very little - "stop messing with this investigation" to be gone through before the story gets going, and Mann manages - just about - to make her involvement plausible, including having her link up with the local newspaper.

The result is a fast paced story which kept me guessing almost to the (satisfyingly dramatic) end. If you're a regular viewer of Midsomer Murders, you'll recognise the tone: fairly light despite the grim things that happen (some of the murders are very gruesome) and, at times, poking gentle fun at the apparently idyllic English scene.

The underlying Carrion King myth is well thought through and a pretty harrowing horror story in itself. In tone it did feel to me a bit un-medieval, for example references to paganism actually come across as more modern than historical, but that doesn't particularly matter in a book which anyway juggles the very old, an equally harrowing tale from the 1970s, and of course the modern day narrative.

And interestingly that Carrion King story is itself being transformed here as we watch - acted out as a play, treated by one expert in a serious, academic way, by another as a shocker to entertain the tourists, and, of course, by the murderer as something else altogether. Elspeth and Peter have a hard time getting to the bottom of what in all this is relevant to the modern day crimes, and that is really the heart of this book.

So overall I enjoyed seeing Mann take on a different genre and he is clearly having fun, producing an entertaining story whose pages fly by.