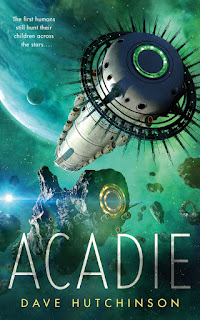 The first humans still hunt their children across the stars.

The Colony left Earth to find utopia, a home on a new planet where their leader could fully explore their genetic potential, unfettered by their homeworld’s restrictions. They settled a new paradise, and have been evolving and adapting for centuries. Earth has other plans.

The original humans have been tracking their descendants across the stars, bent on their annihilation. They won’t stop until the new humans have been destroyed, their experimentation wiped out of the human gene pool.

Can’t anyone let go of a grudge anymore?
This is a fun - and thought provoking - novella from Hutchinson. It's very much a change of mood from his Fractured Europe sequence, or at least, it seems to be on the surface.I very much enjoyed seeing Hutchison sketch on a broader canvas (although this is a fairly short narrative - I read it on my commute home - the ideas in play here could easily have filled a full length novel, so in places "sketch" is the right word: we know what's happened and where we are from the few bold strokes we see, but a great deal is implied).

Our protagonist is Duke, "Mr President", a man elected to lead his deep-space Hab largely on the basis that he doesn't want the office. Waking from his hundred-and-fiftieth birthday party, Duke steps into a crisis. The Hab - and all of the others that make up the colony - may have been discovered by deep probes from earth.

Whether they have, why they are on the run and what they do next, is the subject matter of this story and I won't spoil that. What I will say is that Hutchinson delights in easing the reader's feet out from under them: building up characters as sympathetic then gradually casting doubt on their motives, letting the narrative go one way then sowing seeds of doubt.

It's a great example both of daring space opera - the central conceit of how the colony survives - and great storytelling (is everyone telling the truth? If not, who is lying to who?) and, as I said, is great fun while also raising questions about AI, genetic manipulation and reality.

I'd strongly recommend this, not least as a good starter to the author's work.

For more about this book see the Tor website here.