Review - Madness is Better Than Defeat 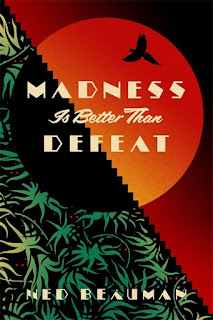 I'm grateful to the publisher for an advance copy of this book via Amazon Vine.

I was looking forward to Beauman's latest book, not only because his previous ones were (individually) well written, good to read and full of ideas but also because gradually patterns seem to be emerging, the books sharing certain themes and ideas, and I wanted to see what Madness is Better than Defeat would add to the mix.

It's an ambitious book, centring on two rival expeditions to Honduras in the interwar years, one of them backed by a Hollywood studio (I thought perhaps echoing themes of The Teleportation Accident - and possibly there are even a couple of direct references to characters?) and the other mounted by the Eastern Aggregates company, a classic buccaneering American corporate ruled over by the fearsome Elias Coehorn Senior.

Kingdom Pictures wants to film its latest jungle picture in the real jungle, using as a backdrop a recently discovered Mayan temple. The Eastern Aggregates expedition, led by Coehorn junior, aims to dismantle the temple and bring it back to New York (exactly why, isn't clear at the start). When the two collide, a stalemate results which sees these two groups of organised, modern Americans camped out in the jungle indefinitely, creating what are almost rival societies which gradual assume a subsistence lifestyle, hunting and foraging for everything they need.

What makes this bizarre is that neither party is stranded: they could return to the modern world any time they choose - and indeed that world surrounds and overtakes them. Beauman slips in little allusions to it, like the concrete dam that reduces the river to a trickle or the rifle shots heard in the forest. While the Americans are aware of these things, they are at the same time oblivious. It seems as though "we're here because we're here", as the song puts it.

Is there some malign influence from the temple that captivates everybody? Is it a more general sort of jungle fever, liable to befall and befuddle Westerners ? Kingdom Pictures' film is entitled Hearts in Darkness - a pretty obvious reference to Conrad which of course thereby entails a reference to Apocalypse Now, a book and film about the madness of a Westerner who creates a miniature kingdom in the jungle. I'm also reminded of how the filming of The African Queen inspired both a book and a film (White Hunter, Black Heart). Beauman addresses these references-to-references directly several times, one character describing how it is the temple which draws people into obsession and madness. The structure itself (formed of two stepped terraces) is also explicitly part of the plot, both as a representation of the structure of a successful story (the so-called Whelt Rule, named after one of the characters) and of this recursive, many layered pattern of obsession and entrapment.

If the setup sounds a bit unlikely and the themes a bit clever-clever, the book is much more than that. Yes, at one level, Beauman does entangle his characters in an unlikely and artificial situation. Yet at the same time, those characters make it a highly likely one given their obsessions, histories and rivalries (and there are things going on here I can't explain because of spoilers). And yes, the themes are somewhat meta, but they work well in the context of the story because... well, because they do. In a sense the book is a conscious thing because it pays conscious attention to what its about. (I'm sorry if that sounds weird - it's hard to summarise what this book does).

Those characters are wonderful - exasperating, human, often repellent but all well realised. There is Trimble, the New York gossip columnist who funds his own paper in the camp and rules it by fear (well, you don't want bad things about you in the paper, do you?) There's Whelt himself, the director of Hearts in Darkness who, over decades spent under the trees, never deviates from his determination to make a film. There's Kurt Meinong, a Nazi on the run who seems like an escapee from one of Beauman's other books (the USA -Germany axis and the LA and New York locations in this book echo both Boxer, Beetle and The Teleportation Accident, as of course does the 1930s setting of part of the book). There's Miss Burlingame (I'm trying NOT to read that as Miss Berlin Game...) the English bluestocking who tags along as archaeologist to one of the expeditions and ends up running the camp.

Above all - and central to the whole edifice - is Zonulet, a CIA man and very much the narrator of the book. In an exercise of authorial power that is either a stroke of genius or a total cop-out - I'm not sure - Beauman gives him almost godlike omniscience, allowing him to narrate events and even recount thoughts to which he was never witness. It makes sense in the context of the plot (I think) and points to there being Something Else at work behind the scenes, something also hinted at in the sad story of "...a young police officer in Red Hook, Brooklyn... found wandering , shirtless, chest hair matted with vomit, mumbling nonsensically... there had been reports of noises coming from inside an old deconsecrated church... whatever he'd found in the church must have been pretty fearsome to send him out babbling into the night like that..."

(You might stop here and reread HP Lovecraft's The Horror at Red Hook...)

Zonulet's presence and his history - as an operative of the Company in its glory days, steaming through the margins of the Cold War organising coups and staging civil wars - and his station, Havana (which he neglects to meddle in Honduras, unfortunately permitting El Movimiento to gain traction in the hills...) hints at another vein of literary reference: the morally compromised, Graham Greene protagonist, seeking to keep faith with distant ideals while betraying them for their own sake. Which is, perhaps, just another embodiment of the "White Man in the Jungle" fantasy. Yet Zonulet gives the story both a (sort of) moral centre and a heart. It's him who is trying to discover what is actually going on - amidst a vast library of Whelt's film in a sort of Indiana Jones style Pentagon museum.

It's hard to convey the sheer range of this book. Often funny, it can twist and become very dark indeed. Just as some of the characters stumble into the temple's hidden centre, where secrets may or may not be found, the reader will suddenly comes across instances of torture and rape and revenge. The book is as likely to sketch, in a few paragraphs, the economics underlying the Kingdom Pictures and Eastern Aggregates camps as it is to explain how one might make nitrate film stock in the jungle or to spin a conspiracy theory around a gangland shoot out in 1930s New York.

That variety, that zest and energy, is very reminiscent of Beauman's earlier books. Like them, this is a complicated story and the way it's told actually makes it more complicated - which is all to the good because the layers - and their gradual unlayering - really make it a compelling book, albeit one which takes its time and builds its effect gradually.

If you pay attention, though, it is a very rewarding one.