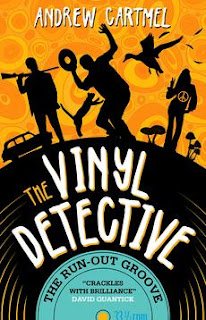 I'm grateful to Lydia at Titan Books for sending me a copy of this.

The Vinyl Detective is back, accompanied by girlfriend Nevada, friends Tinkler, "Stinky" Stanmer and Clean Head and the cats, Fanny and Turk. If you've read the first part of these adventures you'll know what to expect - a search for a rare record crossing over into detective work about, in this case, a dead 60s popstar and her missing son,  peril, wisecracks and a tapestry of (mainly) London streets, housing estates and record shops.

The two books are very much in the same vein (perhaps this one is slightly less violent - though a key character does come to a sticky end in a pretty shocking way) and, with the setting and characters established, Cartmel has more time and space to develop their relationships: the Detective and Nevada are a touching couple and his bickering with Tinkler is fun.

Slightly less well defined are the clients in this case, Lucy Tegmark and John "the Colonel", the brother of the deceased star. They're pretty hostile to one another but I never quite got why. That said, I didn't warm to the Colonel anyway, especially after his pretty unpleasant response to a woman who is rather on the large side.

But. The client brings the mystery, the mystery is what drives this genre: here it's a devilish one with a real touch of tragedy. When Valerian died and her son disappeared, a bother and sister were left behind and they clearly never came to terms with the loss. Now, it's time to try and get closure. But there's someone out there who'd rather things were left open...

I liked the way, in this book, Cartmel has his protagonists actually learn from their experiences in the earlier. Yes, the atmosphere and the general setup is similar but they are determined not to get caught out as they did before (cue a lot of rather clever dialogue as they assess whether they really are, or aren't, residing in "Paranoia Heights". This may be connected with still being rather haunted by those experiences - the Detective himself certainly is early on in the story.

But of course history never repeats itself exactly. The threat here is rather different, and not obvious. I certainly didn't figure out who was behind until very late in the day: Cartmel weaves the story with so many red herrings and false turns that I don't think you will, either.

In short: an excellent continuation of the series. Give me more!

(By the way, Cartmel collaborates with Ben Aaronovitch on the Rivers of London comics. I think I saw a couple of RoL Easter eggs in here - perhaps you'll spot more....?)
Email ThisBlogThis!Share to TwitterShare to FacebookShare to Pinterest
Labels: 2017, Andrew Cartmel, crime, London, The Vinyl Detective