Review - The Switch by Justina Robson 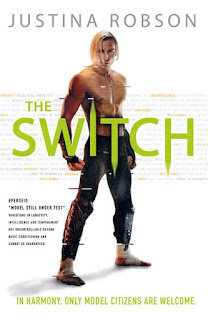 I'm grateful to the publisher for letting me have an advance copy of this book via NetGalley. (It's one of those books I will also buy a copy of, I want a real book to put on my shelves...)

I just loved this book. Loved it to bits. It is sharply written ('I felt like I was ruining an otherwise perfect world, and I couldn't ruin it fast enough', 'Nothing's easy when everyone's paranoid'), clever ('the body holds all the feelings that the person doesn't want to acknowledge'), well observed ('I was in love with my fantasy of being the tough guy, the survivor, the one in charge', 'the real trouble is the people who all benefit from things as they are') and utterly, utterly scathing in its condemnation of hypocrisy and prejudice ('Someone leaked a picture of her holding hands with a woman she knew outside school. Inquisition. The usual.')

Nico Perseid is an orphan. His only friend, the only person he trusts, is Two. In a rigidly orthodox, religiously trussed society, they share a deadly secret: they're both gay. Nico's and Two's world is a bizzarely unequal, upstairs-downstairs kind of world where the masters and mistresses live in Harmony while the scum, the dregs, the rejects are left to the crime cartels - and drone policing - in the underworld of Chaontium. The day that they flee their orphanage and drop over the wall into Chaontium, the two friends are free: free to run with the gangs, live under piles of garbage and scrabble for enough to live on as best they can.

So the years roll by without any way out. Until one day, Nico is made a very high-stakes offer...

I first read Robson's work when she was putting out her Quantum Gravity series, which features that sassiest of transhuman heroines, Lila Black, so it rather made me smile to see the cover image for The Switch - there's a definite similarity there: in one, the kick-ass woman in her tight combat outfit, dominating the cover, in the other the muscly hero, sans shirt, doing likewise. A bit of payback for all that fantasy and SF decorated by attractive young women. And why not? You definitely should judge this book by its cover and inside Robson happily turns the conventions - or perhaps I should say, the conventions of a couple of decades ago because happily things are changing - on their heads and inside out. What's more she does so intelligently and, as I said above, with point.

Because in The Switch, cisnormativity, heteronormativity, is as Nico points out, fundamental. His very existence is an affront, a crime, to the strictures of The Alchemy, the weird, concocted religion - part molecular biology, part astrology - that rules Harmony and which despite everything, still commands part of his respect. The stage is set for rebellion, a journey of self-understanding and the pursuit of liberty (not to say, happiness) - and this is central to the book. It isn't some redress-the-balance diversity chucked in, it's the burning, corruscating moral heart of what Nico (and Two) are.

If that all sounds a bit worthy, it isn't. The book has a stonking good plot, introduces a whole gallery of truly rounded characters, and Robson's writing is at its most versatile. She's able to range with a few paragraphs from Nico's introspection, alone in a hostile city, surrounded by those he fears and who hate him to one of the most bewitchingly erotic scenes, I think, I've ever read as he tears down barriers of fear and restraint to finally be himself with a fellow 'two suns' (the phrase used by The Alchemy for his sort - that astrological gobbledygook again, which seems bizarre but here, goes hand in hard with cutting edge science).

I don't want to give ANYTHING away about that scene in advance. But when you get to it. It just... Well.

So, is there anything actually wrong with this book? Not that I could see. It is of the plot-within-a-plot, what the heck is really going on sub-genre, with revelations, betrayals and reverses coming at us steadily - nothing is ever as it seems, from the opening section, where Nico is under sentence of death, to the end, when we finally discover what The Alchemy is really up to (or do we?) Not everyone enjoys that sub-genre, and you really have to trust your author.  Having read the Lila Black books, I would always trust Robson, so I'm OK with that - if you haven't read your work before I'd simply urge you to go with it, she really knows what she's doing. (There's even a nice line in sardonic references -  from the hints of Culture to 'Nico, you're our only hope' to 'Go back to the start, do not collect any goods and chattels')

So buy this book and read it for the zinging story, the real challenges here to stereotypes, assumptions and conventions, the characters - but most of all because it is, at heart, first rate SF.