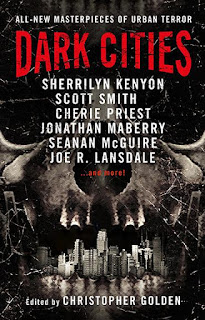 Everyone knows a street that doesn't feel right. Where the light from the streetlamps feels sour and spoiled, like bitter honey. Where the shadows are too deep and too dark, and creep up on you when you're not looking...

I love a good anthology and this collection of horror stories attracted straight away. There is so much to say about the city, so much to appal - whether it's those unexplored turnings that might take you into a strange new place from which you can't return, an abandoned building in which... who knows what... may lurk, all the layers of lives and history which are there just under the surface, or just the oddness of life among all those mostly anonymous people.

As with any collection, the various contributions grip and enthral to different degrees, but this is overall a very strong collection. For me the first and the last stories in this book were the most unsettling. In The Dogs (Scott Smith), the first story, Rose knows that her pastime meeting up with men off Craigslist may be risky but she knows what she's doing. And surely an apartment with three friendly dogs can't be too wrong... can it? This is a story that keeps you guessing and is truly horrific, though I felt the author did perhaps employ one over used device that wasn't really needed.

The last story, The Crack by Nick Cutter,  was queasily upsetting. As a father I know that feeling when the young baby just won't sleep. As a father I also find the determination of the father in this book - the mother hardly features - to stamp his will on the helpless infant repulsive, crossing the line into abuse. The supernatural that creeps up on both of them is scarcely registered at first, bound up as Daddy is in making his little boy into a strong man: in many respects, in this story, it's the human that's the monster and in that respect it fits well with the overall feel of the book, although as the events mainly take place within a single house it arguably isn't particularly a city story.

In Stone (Tim Lebbon), our unnamed narrator, unable to sleep well after the suicide of his friend Nigel, roams the streets of the city at night. One of those nights he spots a woman and follows her. Lebbon creates a nice balance between the haunted, despairing life of the narrator and the darkness of the city and its brooding dominance over those it notices.

Like Lebbon, in The Way She Is With Strangers Helen Marshall leaves much unsaid. What exactly did happen to Mercy's daughter? How is it affected by her having come to the city? Again there are dark secrets here and one senses that the progression of events mirrors something private we're not quite seeing. Atmospheric, creepy and despairing.

MR Carey's We'll Always have Paris has a lighter tone, welcome after the preceding dark stories. Inspector Philemon is one of the city's top detectives and is assigned to investigate a series of horrible murders. He jostles with rivals in this, such as Riordan, of the Garda and it becomes clear that somehow, Paris has become scrambled up with Dublin, New York, Berlin, London... just what's going on and how is it associated with the murders? An inventive and disturbing story.

With Good Night, Prison Kings, Cherie Priest dials us back towards the grim in a powerful tale of a murdered girl seeking revenge as does Amber Benson in What I’ve Always Done, an unsettling story of obsession, revenge and love gone sour, showing how in the city, anything can be  a trap. Traps are a frequent theme in this book - the city's a maze and it's a maze set with snares. But not everything wandering it is monster and in Grit by Jonathan Maberry we meet on of the good guys, albeit one who's definitely a bit tarnished – bounty hunter Monk Addisson, who has a very strange relationship with his fugitives, which  can last beyond their deaths.

Dark Hill Run by Kasey and Joe R Lansdale features a rather different pursuer and a pursuit that lasts years then we're back to the traps with Happy Forever by Simon R Green, the sad story  – of a girl frozen in time

In The Society of the Monsterhood by Paul Tremblay the threat and tension comes from the unseen narrator and the people of the neighbourhood ('we') who have taken against a group of bright kids offered a free place at a suburban school. Somehow the situation seems to conjure a monster: but is it real? This story is very powerful, the style giving a real sense of the exclusion of the little group and narrator's complicity. Field Trip by Tananarive Due addresses exclusion in a different form - a short trip on the subway leads astray young teacher taking her class home from a trip?  With a powerful and unsettling background in racial prejudice and police violence this story literalises the idea of people becoming nothing.

With The Revellers by Christopher Golden we encounter some real 24 hour party people! In New York! Endless PARTY! But what happens when you can't find your way out again? Ramsay Campbell asks the same question, in a way, in The Stillness. Campbell has an unerring eye for the creepy, the wrong, in modern life. If you've ever seen a living statue in full sunlight on a crowded street and thought about it, um, then imagine meeting one at dusk in an empty ally.

Imagine it following you home...

Moving from the modern world back to fantasy, or sorts, in Sanctuary by Kealan Patrick Burke, which, with The Crack and Graffiti of the Lost and Dying Places was my favourite story in the book, a young boy exists in two worlds. There is the normal one, where he is wounded by a family break-up, and a truly strange place (the pub has darts made from bones wrapped in leather). He seeks sanctuary, but in which of the worlds? And from which? And why is the end coming?

Matter of Life and Death by Sherrilyn Kenyon is a story to make the publisher tremble! Helga East, the author from Hell is dead, and her editor rejoices. But something strange is afoot in the bank building across the way. And even stranger things begin to happen in their office. A spooky and twisty story - written with some feeling about authors and publishers...

In Graffiti of the Lost and Dying Places,  Seanan McGuire evokes an eerie sense of dissolution as a rundown district is gentrified, gradually killed off by the encroachment of a shiny new financial quarter. What might the old bricks and plaster do when attacked so?

Overall, a strong collection with something for everybody.