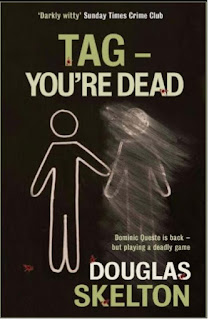 I'm grateful to the publisher for an advance copy of the book and to Gordon who arranged the blogtour and invited me to take part.

Tag - You're Dead is a noir thriller set in Glasgow. It's so noir, you almost need a torch to read it, as protagonist Dominic Queste wisecracks his way from abandoned tenement to remote moorland cottage to a restaurant where a chain-smoking blonde sits in a back room keeping secrets. Queste lards his narration with film references, as does the anonymous killer who takes an interest in him, and wisecracks for his country when cornered by the cops or the Glasgow heavy mob.

The style is authentic, heady and pitch-perfect. But it's not just a matter of style, of pastiche Chandler. Skelton knows how to spin a plot, too - how to spin a web, I should rather say, that catches his characters one by one. There's a pattern, because they're all in the same web. There's no pattern, because... well, that would be telling. It is, in the end, a devilishly simply premise. Devilish and simple and deadly.

Skelton peoples the book with unforgettable characters - Queste himself, his ever sadder partner, Ginty; Queste's backup, slum priest Father Verne and brothers Duncan and Hamish Sullivan who provide backup for the good Father ("We're all going to Hell - the question is, whether we go there alone") who runs a women's refuge and sometimes needs a shield against the dealers and the pimps whose business he's disrupting. They're the main players, but we also see cops, journalists, Glaswegians of every station, and they're all drawn with an eye to the telling detail, all made alive (if, in some cases, then made dead very quickly).

It's a fun read, a sobering one and every page is compelling. It may be a bit cliched that Queste is a grubby angel, that he was himself an addict and isn't above bending the law here and there, but Skelton carries this off with aplomb - partly through making the whole thing so transparent: Queste knows that he's in a noir thriller and behaves accordingly, as do some of the others such as muscle man Tank Milligan who dresses like a hood from a B-movie.

While there are shades of night over all the central characters and Father Verne, again, looks forward to the future battle they won't win, I hope that Queste and his friends appear agains soon because in an ever darkening world, boy do we need some deeper darkness to provide relief. 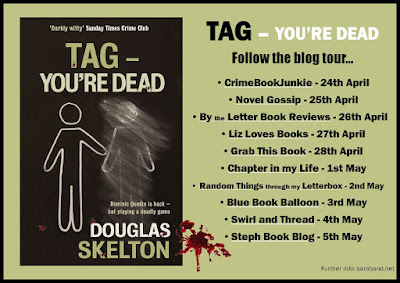