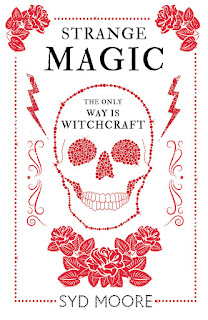 The Only Way is Witchcraft...

I'm grateful to the publisher for an advance copy of this book as part of the book's tour (and to Syd for writing here about her book).

When Rosie Strange inherits her grandfather Septimus's run-down Essex Witch Museum, her first thought is to close it down, sell it and take what she can. Estranged from Septimus for many years, her branch of the family has eschewed his interest in the weird and supernatural and got on with making a living. Rosie herself is a benefit fraud inspector -  neither the most glamorous or popular job in the world but one that certainly plants her feet firmly on the ground.

Of course, things don't go exactly according to plant. Rosie didn't expect to step into a mystery, and she didn't expect to run across the enticing (but annoying) young curator, Sam Stone in whose company she undertakes a hair-raising roadtrip across England, against a looming deadline...

Three things motivate the action in this book. There's the background of the Essex Witch Trials - real events, more deadly than the Salem persecutions and which inspire the (fictional) museum Rosie now has charge of. (And by the way, how cool is that? Having your own museum? If it was me I'd literally never leave again...) Moore clearly feels passionately about what took place and that really comes though in her writing.

Secondly, there's the whole Essex Girl thing. Rosie is an Essex girl and proud of it, as well as being many other things, and to a degree I think, again, Moore's righteous anger at women being stereotyped and sidelines animates some of Rosie's and Sam's attitudes in this book. Which is OK by me - it never becomes merely a vehicle for a point of view, and there's a curious and interesting interplay between the witchy bits of the plot and this aspect.

The third angle (come on, we're talking witchcraft, there have to be three aspects...) is a good old-fashioned mystery. A boy is in danger: saving hims is all tied up with finding the remains of Ursula Cadence, one of the original Essex victims. And so we get a wild chase via Boscastle, Porstmouth and points East enabling Rosie and Sam to spark off each other and work out how they really feel... or not. The creepy bits are creepy, Sam is a bit mysterious and something really nasty is brewing, which all comes to a head in a scene reminiscent of The Omen.

I enjoyed this book. It's not perfect - I felt that the characters hurried rather into the mystery, when they would surely have asked more questions and taken some persuading to become involved, and towards the end a great deal of information is conveniently provided by a hitherto unmentioned contact - but it is a great deal of fun, lighthearted and dark at the same time but with real heart and some serious issues at its core.

The central mystery - a tension between rationalist Sam's belief that the witch hysteria was only prejudice, its victims mere scapegoats and the looming presence of something darker here - is never quite resolved, nor, perhaps, ought it to be (especially if, as I hope, Moore plans to continue the series).

One final note in passing: I don't know if it's intentional but in having her action run up to a climax on Good Friday/ Lady Day, Moor has chosen a very significant and rare conjunction of festivals - the two don't often coincide. This blogpost explains why that is - for reasons I won't spell out for fear of spoilers, one might well see this as a very appropriate conjunction...