It seems to be Essex week for me. On Monday - Bank Holiday - I went to Banbury museum to see Grayson Perry's tapestries which are on tour. Entitled "Julie Cope's Grand Tour" the two pieces tell the lifestory of the eponymous Julie, an Essex girl. Supported by Perry's own narration of a ballad for Julie, they are tender and moving and I'd urge you to see them if you get the chance

Coming back up to date, I'm delighted today to be joining the blogtour for Strange Magic, the new book by author Syd Moore which is published TODAY, 4 May. I've reviewed it here but before that, Syd has written a piece for the blog examining a key aspect of the background to her book - the curious history of Essex girls... and Essex witches. Over to Syd!

Essex Girls and witches. You might be forgiven for thinking that these two stereotypes (or are they now archetypes?) have nothing to do with each other. Certainly on first impressions they appear to be polar opposites. The Essex Girl, after all, is often depicted as blonde, in heels (possibly white, possibly of the stiletto variety), with a shed load of makeup plastered across her face. The witch, on the other hand, tends to evoke images of gnarled and scrawny limbs poking from tatty black robes, ‘Wicked Witch of the West’ style green hooters and masses of matted black hair. Different, no? Physically perhaps, but actually they share a lot of similar characteristics.

Witch persecution in England in the 16th and 17th centuries hit the county of Essex very hard. Between 1560 and 1680, for instance, in Surrey, Sussex and Hertford there were 185 indictments for witchcraft.  For the same period of time Essex, on its own, saw over 500. In fact, at one point Essex was widely known as ‘Witch County’.  The witches, of course, were mostly poor and often vulnerable, scapegoated for natural disasters or illness by villagers, picked on by neighbours, rounded up by witch hunters.  A fair few were accused of being lewd and lusty, of fornicating with men and the Devil himself.  A good portion of those who went through to the courts were considered ‘loose’, meaning they were not under the protection, shelter or control of a man.  And as, at that time, women needed a man to represent them at trial - a husband or a son, brother, nephew – many of these women were legally ‘dumb’. So - carnal, low of social class, loose and dumb. Sounds awfully like another stereotype doesn’t it?

I have a theory that the stigma associated with the women of Essex never faded. That this idea that females from this particular county were a bit off, weird and/or ropey persisted for a long time. So when the stereotype of the Essex Girl appeared in the Eighties/Nineties she was taken up quickly and very decisively spawning a wave of jokes and books and articles. Most of the jokes had the effect of neutralising what was in fact quite a powerful type of woman. Scary even. The Essex Girl was generalised to be promiscuous i.e. independent and sexually autonomous. Or was that ‘carnal and loose’? She worked hard and spent her money how she liked on what she liked. So what if she fancied spending some of it on beauty treatments. As far as I’m aware nobody has produced any evidence that beauty treatments correlate to IQ.  But indeed the OED begs to differ. In their definition she is ‘unintelligent’ too. So, she’s ‘dumb’?

Again, carnal, loose, low of social class and dumb – are you reading me?

I think it’s time to put prejudice aside, take a long hard look at where the stereotype might have come from, and try and put it to bed. If we can’t do that then we should realign the girl with some of the other qualities she’s become known to possess – confidence, sass, strength and fun. High profile women who have been associated with the stereotype, for better or for worse, have done remarkably well for themselves showing canny business acumen and drive. Amy Childs used her fifteen minutes of fame to launch a beauty range and fashion collection which is still thriving. And in today’s current climate with its problems of grooming and cyber-bullying, confidence and sexual autonomy in girls and women should surely be something to applaud.

Changing the attitude to the stereotype might take some effort but it’s not impossible. Witch to Essex Girl, after all, is a pretty miraculous transformation.


STRANGE MAGIC by Syd Moore is published by Point Blank, an imprint of Oneworld, paperback £8.99 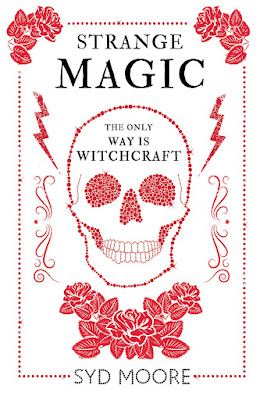