Review - A Game of Ghosts by John Connolly 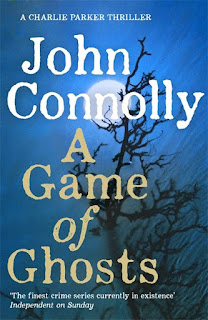 I'm grateful to Hodder for an advance copy of the book.


It is deep winter. The darkness is unending.

The private detective named Jaycob Eklund has vanished, and Charlie Parker is dispatched to track him down. Parker's employer, Edgar Ross, an agent of the Federal Bureau of Investigation, has his own reasons for wanting Eklund found.

Eklund is no ordinary investigator. He is obsessively tracking a series of homicides and disappearances, each linked to reports of hauntings. Now Parker will be drawn into Eklund's world, a realm in which the monstrous Mother rules a crumbling criminal empire, in which men strike bargains with angels, and in which the innocent and guilty alike are pawns in a game of ghosts . . .

I read a lot, but it's both frustrating and wonderful to realise that there are still so many excellent authors and series that I have never yet touched. Frustrating, because HOW CAN I READ MORE and wonderful because - well, because I can discover books like this.

I'm extra, extra grateful to have encountered Charlie Parker in this his - I think - 16th(!) adventure.

Parker is a PI, based in New England, and one cold winter he's drawn into investigating the disappearance of fellow PI Jaycob Eklund. The case takes him to some places - and people - that are far from nice, far from rational - whether the strange, extended Brethren and their ghostly companions or the daunting Mother, boss of a crime family and herself a deeply creepy being.

At the same time Parker is wrestling to keep contact with his daughter when protective ex wife Rachel seeks to have contact cut off. A strength of the book is that it shows how both Rachel and Charlie are right... but also wrong. A sad situation, that vulnerable, fallible human beings are trying (and failing) not to make worse.

Parker isn't, though, without resources of his own. Shadowed by the enigmatic Collector and his Hollow Men (I'll have to read the earlier books to understand what they're about) he has more solid assistance from henchmen (and couple) Angel and Louis. (The way the relationship between them is sketched is masterful: even without reading the earlier books you sense the history there).

Even Parker's daughter, Sam, who was recently the target of an abduction, has more to her than is obvious (and just what she'll come to has yet to play out in the series).

In a story where nobody is what they seem, and the stakes veer from violent crime to cultish bargains with supernatural entities, it seems that absolutely anything can happen - with the real question being how many innocents will suffer along the way.

I was slightly taken aback by Connolly's... prodigality... with his characters. He lavishes as much care and attention on developing the background and life of someone who'll die halfway through the book (or sooner!) as on Parker, Sam and the others: all seem real, of worth, making the losses and deaths all the more horrific.

Game of Ghosts is an  amazing mash-up between the ghoulish - with nods to Lovecraft in the New England setting and especially using Providence as one of the main locations - and the hard-boiled (that background of PIs in shabby offices with gangsters in the background). There is a real sense of tension as we wait to see if Parker can unravel the threads before this victim dies, or if not this one, that one - even as others are working from the opposite direction, ruthlessly killing to keep their existence, their very souls, secret...

It's profoundly unsettling, gripping reading - and I enjoyed every minute. Not having read any of the earlier books wasn't a problem - Connolly does a few recaps to bring the reader up to date, and the mysterious background adds rather than detracts from the effect - but this did give me an appetite for more and I rather think I'll have to read them now from the start.