Blogtour - The Man Who Loved Islands by David F Ross 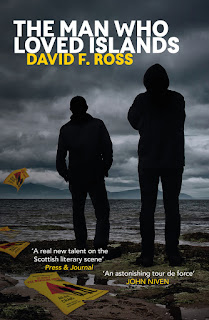 I'm grateful to Orenda Books for an advance copy of this book - and proud to be starting off the blogtour.

First, full disclosure: I've read and reviewed the two preceding books in this series, The Last Days of Disco and The Rise and Fall of the Miraculous Vespas, and indeed am quoted at the front of the book. I can't pretend to be disinterested: I loved the earlier books and Islands is one of my eagerly awaited books of 2017.  Ross's trilogy is one of the most interesting and original recent publishing debuts and as someone growing up in the late 70s and early 80s, I find it nostalgic - but also tender, realistic and hopeful.

The third volume is just as good as the first two, bringing the series to a close (perhaps) but also back full circle. In The Last Days of Disco we saw Bobbie Cassidy and Joey Miller launch Heatwave Disco at the weddings, private functions and, indeed, discos of early 80s Ayrshire, and their subsequent entanglements with local hard men and police, alongside the tragedy of Bobby's brother, Gary's, involvement in the Falklands War.

Then, in Miraculous Vespas, Ross told the story of the eponymous band, a parallel tale dominated by the awful - and Mesmeric - impresario Max Mojo. The Vespas were apparently deeply influential on the music scene of the 80s and 90s, despite fading from view, and were due a revival. But it didn't exactly go as planned...

Now, everything is brought together, brought home.

The Heatwave boys, once the closest of friends, have scattered, seen success, seen heartbreak - and are now on the slide. Bobby made a successful career as a DJ on Ibiza but is now fading, haunted by guilt and being edged out of the classier venues. Joey is a successful architect but seems doomed just to wander the world's airports and corporate hotels, always jet lagged. He, too, is being pushed towards the door by the younger partners in a firm he helped to found.

So when Joey, drifting in China, gets a message from Bobby's - and his - old friend Hammy May, warning that Bobby is very ill, he sets out for a last goodbye. Thus begins a fresh roller-coaster ride of misunderstandings, bonkers plans, double crossing, embezzlement and, of course, music, music and more music, culminating in one of the most remarkable concerts Ayrshire will ever have seen.

I enjoyed the way that Ross took the two friends - or ex-friends - and showed what had become of them in later life. While there are some flashbacks, especially to explain Bobby's career ('the following decade passed by in a drugs-fuelled, hedonistic, self-indulgent blur') we don't see that much of the Disco period, nor, as the Vespas' story parallels that,  much of that book either book. Yet everything still dovetails with the earlier stories, picking up characters and plot strands one might not even have realised had been left unresolved and taking them to a conclusion (mostly).

The Ayrshire dialect is as thick as ever, and the characters as foul mouthed; I realised how much I'd missed Bobby especially, indeed, from the very star, while the action may be set in Ibiza or China we're home, as it were, even if the international angle gives Ross chance to skewer a much wider range of human folly and absurdity that the setting of the earlier books allowed or to indulge in comic sub plots (such as Hammy's encounters with the secret society of middle aged women on Ibiza...)

And there's the tender way Ross brings the two boys together again, older, flabbier, less fit and suffering from broken relationships and stupid misunderstandings but - inside - the same starry eyed chancers they always were. And then we also meet other old friends, until in the end it's almost like the best sort of school reunion (I imagine that s school reunion in Ross's retelling would be a wild affair to say the least).

There is nostalgia - Bobby's obsession, in his Ibizan villa, with that old black and white version of Robinson Crusoe that used be shown by the BBC every year in the summer holidays; a sharp dissection of the glory days of club music; recollections of school dancing lessons - 'a brutal and hideous experiment in child cruelty by way of state-promoted embarrassment'. Simply marvellous evocations of times and places gone, for better or worse.

There is also a strand of hope and redemption, with some scores settled, new relationships, and some bad business from the past sorted at last. All in all a satisfying (yet spectacular - you'd expect that) conclusion to the trilogy, and all immensely readable (Ross has some great turns of phrase - 'It was a goodbye kiss from a Goodbye Girl'; 'they also indulged like it was the last days of Caligula'; 'It is beginning to sound like the worts blues song ever').

It was, in the end, sad to part again from the Heatwave boys - but great to see them at their best again.

A book I'd strongly recommend, great summer reading or just great reading, if you don't want to wait.
(And if you haven't read the earlier books - why not? - start with those, you've got a treat in store). 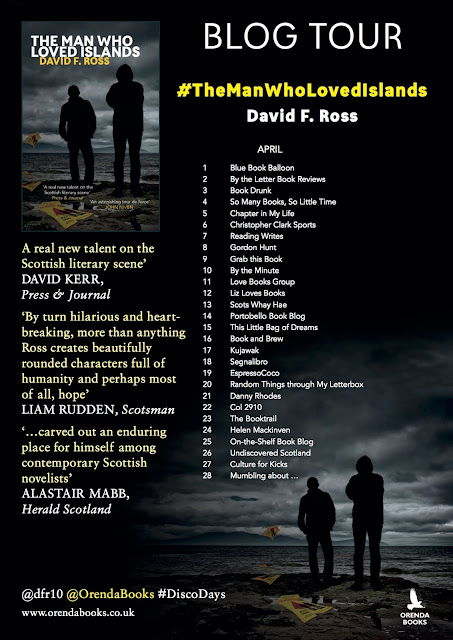