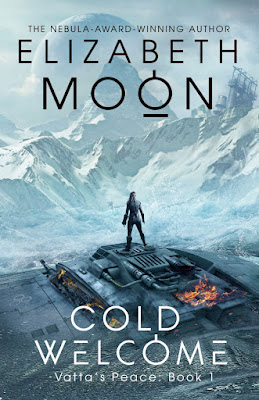 I'm grateful to Orbit for a copy of this book to review.

Admiral Ky Vatta should return to her childhood home a war hero, but on the way her shuttle is downed by sabotage. Marooned in a hostile landscape it’ll take every bit of wit, skill and luck she can muster to lead her fellow survivors to safety, knowing that the mysterious enemies who destroyed the ship are on the hunt, and may have an agent in the group ready to finish the job at any moment. And was the sabotage an attempt on Ky’s own life, or someone else’s?

Reading this book was in several ways an unfamiliar experience for me. I hadn't read anything by Moon before - in particular her central character Admiral Vatta has featured in a whole series ("Vatta's War") and so has plenty of backstory and I don't read a great deal of military SF or spaceopera.

Still - something about this book grabbed me.

In many respects it's a survival tale. When the shuttle goes down, Vatta is left as the most senior officer commanding a ragtag of passengers who just happened to be sharing a flight with her. They're not even members of her fleet. They land in the inhospitable Southern Ocean of her home planet, in the winter, and she's responsible for keeping them safe and leading them back to civilization. It's an appealing concept for a story, made more so by the possibility that there may be a traitor on board the life rafts, and doesn't really depend at all on any SF - survival is survival and, as Moon makes clear in her acknowledgements, the principles remain the same whether you're writing about Shackleton's voyages or remote events on a planet far, far away.

As are the burdens of command, the prejudices, fears and divisions that can doom an expedition, and the depths of endurance that can be drawn on to defy the odds. Those, really, are the themes of this story: there is some plot about Vatta's family, her lover, and wider events which eventually intersects with her story, but mainly it's down to her. The loneliness of command is perhaps similar whether exercised on the bridge of a starship or on a liferaft.

Moon plays something of a blinder here. If, like me, you haven't encountered Vatta before you may find her admirable, but hard to immediately like. (A little too correct and perfect, perhaps (though thankfully not protocol-bound like her aide, Jen). Readers who followed the earlier adventures will I'm sure have got past this, but it took me a whole to be at ease with the Admiral. However, the opening sections of the book are so action filled and challenging that one scarcely notices this - by the time things let up a bit, Vatta has got under one's skin, so to speak. It's a clever structure, helping to introduce a solid and compelling character even if you haven't read the earlier series.

From then on, the book introduces elements of a mystery, as well as some murky commercial rivalries and politics, which both affect Ky in the remote Southern winter and her family, spread across the galaxy. Exactly what is going on is never quite clear - there are further books to come and no doubt some of these events will be explored there. Certainly the book stops right in the middle of things, leaving the reader desperate to know what will happen next. By then, Ky Vatta has set herself a quest. There are some obstacles to achieving it but if we've learned one thing form this book it's that she's not easily put off.

Excellent start to a new series, whether you have already read Vatta's War or not.