Review - The Boy on the Bridge by M R Carey 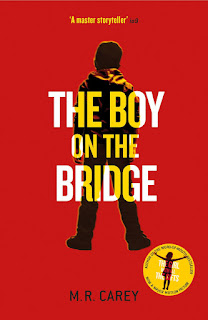 Once upon a time, in a land blighted by terror, there was a very clever boy.

The people thought the boy could save them, so they opened their gates and sent him out into the world.

To where the monsters lived.

I'm grateful to Nazia at Orbit for sending me a copy of this book, which is one of my most anticipated of 2017, following up Carey's The Girl with all the Gifts.

Like Girl, it's set is a world after the Breakdown. In order of events, you'd read this first because it takes place 10 years or so before Girl. However, I think that - especially if you haven't seen the film - you should read Girl first, because otherwise the revelations in that book, and the way it builds tension, will be slightly spoiled (not least, what the Breakdown was, who the children in Girl are, and what their fate is).

Similarly, don't read this review if haven't read Girl as spoilers for it will arise.

The basic setting of Boy is the same, with fungus-infected Hungries roaming Britain and the last remnants of humanity either holed up in Beacon base, somewhere on the South Coast (a nod to The Day of the Triffids where the human survivors make their stand on the Isle of Wight?) or roaming around as "junkers" - Mad Max extras in battlewagons, pillaging and raping as they see fit. Some of the relationships between the characters feel similar too: an adult mentor to a troubled child, a dislikable researcher, down to earth soldiers who turn out not to be quite so down to earth.

The actual characters in the two books don't, however, really cross over much: Dr Caldwell is mentioned by name here but never appears, and the main continuity is provided by "Rosie" - the Rosalind Franklin, a vast, armoured and tank-tracked mobile home/ laboratory in which the main characters live and work. They're on a mission to find a cure for the Cordyceps plague, yet it's a tense life, holed up in a tiny living space, beset by Hungries and junkers and with - frankly - no progress made.

Rosie turns up, of course, in Girl (she was found abandoned in London) so it's a fair bet that the mission here doesn't go well, although the timeline means we don't, can't, know till the very end of this book precisely how badly. But it does look pretty bad. There seems to be a traitor on board: despite the severity of the situation, Beacon is divided by selfish ambition as the civil and military sides jostle for power (as though being lord or lady of a giant prison camp surrounded by zombies was a prize worth having) and the divisions are reflected on Rosie too with split command, mistrust and hidden agendas.

Against this background, Carey draws the crew with compassion and insight, especially Stephen, the Boy of the title, and Samrina Khan, his mentor and rescuer. Stephen is young, a gifted scientist but clearly has some difficulties with relationships and social settings (he can't be touched, is unable to lie and is barely tolerated by most of the crew). It's not clear whether Stephen is - as his colleagues believe - on the autistic spectrum, or whether he has been traumatised by the loss of his parents to the Hungries, but what does come through is the bond between him and Khan as well as Stephen's obsession with defeating Cordyceps - obsession to a point that may endanger the lives of the crew: the corrosive effect of private agendas, even well intentioned ones, and of a lack of communication, is one of the themes of this book, seen also in the friction between Dr Fournier, the leader of the science team, and Colonel Carlisle, the military commander.

Fournier is probably the least sympathetic character here, essentially a bureaucrat who adds nothing to the mission, who often knows what he's doing is wrong but does it anyway because he's told to, while Carlisle - Carlisle is an enigma. He burned half of Southern England for, essentially, the same reason, who's despised by his men (and women) for it, but who seems to be something near a genius at ensuring the survival of the mission.

Carey makes these, and the other members of the crew, fully alive and their rivalries, jealousies, resentments and gifts create an atmosphere in the lab which you can almost taste. Rosie moves slowly, negotiating a safe route among abandoned cars, roadblocks and other obstacles, with the continual risk of ambush or pursuit: but it's as dangerous inside her as outside, with the need to avoid any of those tensions flaring into open conflict and to keep the mission alive even once Beacon falls silent.

The reasons for that silence and the nature of Cordyceps - at which Stephen steadily chips away - are the main mysteries lurking behind the events of this story, but it's the humanity of the crew, and the humanity - or not - of the 'feral children' who we met in Girl, that drive the book towards a dramatic and emotional conclusion.

Boy is a prequel/ companion that fully lives up to the promise of Girl and which may even indeed be slightly better - for me, the characters were better realised and fact that this was the second book allowed their backgrounds to be painted in more detail (we know more about Stephen's origins than we do about Melanie's, for example) and the wider cast also gave more potential for interactions between them. It also adds to or completes something already in Girl - a discussion about hope for the future: whether it's to be found in doggedly preserving what we have (as the Beacon authorities try to to) or in accepting change and development, even at the cost of enormous loss, and letting something new and different be born.

That's the choice that, in different ways, the characters here all face and again is is a theme that resonates with classic SF in many respects. this is, at heart, a novel of ideas - as well as being a compulsive read, especially in the second half: I only put it down very reluctantly when I was 17 pages from the end but we had to go out!

In summary, I'd strongly recommend this book - but advise you have a few tissues ready as you near the end.
Email ThisBlogThis!Share to TwitterShare to FacebookShare to Pinterest
Labels: 2017, M R Carey, Post Apocalypse, SF, The Girl with all the Gifts