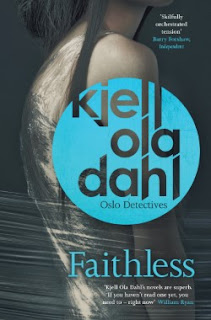 It's my turn today on the blogtour for Faithless. I'm grateful to Karen at Orenda Books for a copy of this book and to Anne for inviting me onto the tour.

I hadn't previously met the team of Oslo detectives of which Gunnarstranda and Frølich are a part, and there is clearly a fair amount of backstory to them - not least in the way that Gunnarstranda drops out of his holiday to get back in on the case even where, it seems, he isn't really needed. And what about Lena Stigersand and her strange, not to say brutal, relationship with Ståle Sender? And the bad blood (seemingly) between Frølich and his boss, Rindar?

I don't know how far these complex relationships develop from previous books, but in any case, Faithless is still an excellent place to pick up the threads and get to know the lives and loves of the detectives. They come across as real people, and that reality only adds resonance to the crimes they're confronted with here.

The first of these is the very  nasty murder of a young woman - found dumped in a skip, her skin scalded by boiling water, her clothes missing. Rape is assumed: but there's a link back to Frølich, and to an old friend of his, which suggests the death may be connected to an ongoing investigation.  The affair wakes something in Frølich's mind and he begins to experience what seems to be PTSD. can he get to the truth without having to go back to some very dark places in his past?

There are also similarities between this crime and a cold case - but that took place 1500km away, and many years ago. As the deaths begin to rack up, Frølich is also investigating the disappearance of Rosalind M'Taya, a young African visitor to Oslo. Nobody else seems to take it very seriously - while it's not spelled out there seems to be a whiff of racism here - but Frølich can't resist picking away at this loose end, even with another major investigation on.

This is a fascinating ensemble cast: it's enthralling simply watching how they react and bump off one another, trying to tease out in one's mind not only who committed the crime(s) but how the team's cohesion - or lack of it - will affect the investigations. It's actually much more fun than the classic brooding loner detective, who we know will wrap everything up on the last page (and go away to brood). Yes, there are characters here who strike out on their own - and get into real danger - but one the whole there is more of the air of a family - a dysfunctional family beset by rivalries and resentments, but still a family.

Bartlett's translation serves the story well, preserving enough of an air of foreignness (which is important - I always think it's a shame if a translation becomes so seamless that you may as well be reading about Milton Keynes or Glasgow) yet making the story readable and clear. And behind that, Dahl's story is taut, at times tragic and always, always absorbing.

So, who is faithless, how, and why? Saying too much would spoil the story, but I think most of the characters are, in different ways - not all of them in bad ways, admittedly, but there is a lot of darkness here, in a book that's set in the long Northern summer days. 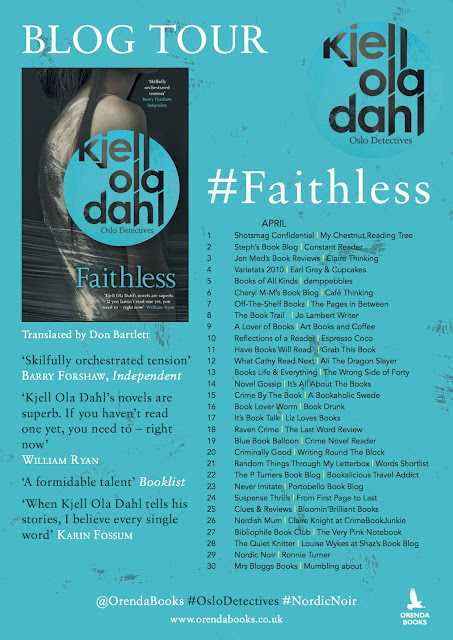