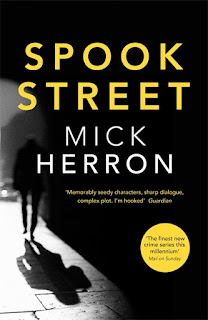 I hadn't read a full blown spy thriller for a while, and had never read any of the Jackson Lamb series (this is no 4). I know those who've read the previous books will snap this one up and won't need to bother with reviews like this. But for those yet to meet Lamb and his crew of "slow horses" you've a real treat coming (and Spook Street is a perfectly accessible place to get on board).

The "slow horses" are Security Service assets who aren't quite... up to the mark. Maybe a copybook was blotted in a particularly blatant way? Maybe it's anger management issues, gambling or substance misuse? Whatever, there's a place for you in Slough House, a decrepit block in Central London where careers (and heating systems) go to die. Slowly.

The whole rickety edifice (I'm speaking literally and metaphorically) is presided over by Lamb himself, a magnificent monster of a spy, the apotheosis of the raddled, maverick operative: unkempt, unhealthy, rude, foul mouthed, hard drinking, lacking all respect for authority or procedure, he's the embodiment of the Slough House ethos: you sense the Service would have put a bullet in him long ago if they didn't know full well that he'd cause more trouble dead than alive. (Probably by smoking in the hearse, then clawing his way out of the grave again).

A bullet though the head... loose ends and retirement of assets is the central theme of this book. River Cartwright, grandson of renowned spy David Cartwright (who never quite made First Desk) becomes concerned that his grandfather is beginning to wander, and may become a problem for the Service. Cartwright senior is beginning to see stoats all around - not the furry kind, but watchers. And he's not as defenceless as they might think.

So it's no surprise when someone ends up dead. The Service would like to clear up quietly, but someone brought Lamb onto the case and he does nothing quietly.

Told in convincing insider jargon and through pretty much non-stop action, this book takes you to a world of bitter internal struggle, disillusionment and private warfare. Switching between France and London, it follows Lamb's team in their stumbling attempt to tidy things up, presenting some unforgettable characters in the under-paid, under-performing millenials of Slough House (think, Bridget Jones administering a waterboarding) struggling with their 20s disappointment one minute, engaging in life and death combat the next.

It's far from the world weary sophistication of George Smiley, even as the tentacles of the Cold War reach out to shape the future. New enemies and new threats may abound but their seeds were sown long ago.

I loved this book just for the characters and the setting. It would have worked almost as well if there hadn't been a plot or an immediate threat driving things: Herron has a real gift for people, even if, as here, he happily uses the setting to say something about his people (that glugging, sputtering heating system in Slough House, contrasted with the gleaming glass of the Service's HQ, says it all really). Indeed I wasn't completely persuaded by the threat, but that really didn't matter.

(I also smiled at the scene set by Blackfriars Bridge and the passing mention of the nearby banks, publishers and other undesirables. There does Hodder have its offices again...?)