Review: A Conjuring of Light 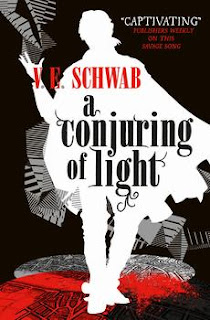 I'm really grateful to Lydia at Titan Books for an advance copy of this book, which is one of my most keenly awaited books of 2017.

The precarious equilibrium among the four Londons has reached its breaking point. Once brimming with the red vivacity of magic, darkness casts a shadow over the Maresh Empire, leaving a space for another London to rise.

Kell–once assumed to be the last surviving Antari–begins to waver under the pressure of competing loyalties. Lila Bard, once a commonplace–but never common–thief, has survived and flourished through a series of magical trials. But now she must learn to control the magic, before it bleeds her dry.

Meanwhile, the disgraced Captain Alucard Emery and the Night Spire crew are attempting a race against time to acquire the impossible, as an ancient enemy returns to claim a crown and a fallen hero is desperate to save a decaying world…

I've said this before, but sometimes a book review almost seems beside the point. I wonder if I should simply say BUY THIS BOOK!!! - it is so good. And in any case, when it comes to a book which, like this, ties up a trilogy, those who have read the earlier books will know very well whether they want to read more.

But I do want to say something about ACOL because it's so... it's such a... it... well, the trilogy it's part of has, for me, come to be almost a monument in SFF. It's hard to believe that a few years ago, these books weren't there, now they are, and everything else fits around them (almost as though Kell had been at work here). That deserves some comment and some (spoiler light) analysis, I think.

And if you haven't read A Darker Shade of Magic and A Gathering of Shadows (where have you BEEN?) I hope that this will persuadfe you to do so.

So - why do I think this trilogy, and this book, are so great?

First, the characters. They are so real and so true. You may not end up loving everyone (except "bad ideas are my favourite kind" Lila, of course you'll end up loving her because LILA) but you will see them all as so real and the cost of what happens in this book as a real, crushing cost. And they're all so mixed up, so frustratingly human, not heroes - or villains - on a Quest.

Everyone you'd expect and hope to meet is here, and some others. Kell and Rhy, of course, royal princes, magical and non-magical, with their conflicts and history.  Lila too, as dangerous as ever (perhaps more so) and as wonderful as ever (Lila Bard! Yes!) And Alucard Emery with his on-off relationship with Rhy (what exactly did happen before ADSOM?) and... and... and stop, David, there are some others here you could mention that might count as spoilers. What I will say is that everyone we meet - even those who previously seemed unpleasant or even - is, over the course of the book, shown to be a good sight more complex than the judgmental reader ever gave them credit for: all the burdens, the noble motives gone bad, the impossible decisions, the weighing of least evils, is exposed.

Even the fears of parenthood (which are, simply, all consuming) have their place.

Then, the deft way that everything from the earlier books is brought together - even amidst new perils - and resolved... but still with that cost, with pain and blood and regret. It makes me think of the final part of The Lord of the Rings. Poor Frodo suffering what today we'd call PTSD and adolescent me not getting it, heedless that the book was written by a man who must have been suffering just that. Well here there's the same sense of dark. I don't know what Schwab must have imagined herself through to portray this but the empathy in this book simply shines out. Incredible.

And the worlds - we see new aspects here of the three Londons and their surroundings. There's a telling difference between most of the action on the books - taking place in one London or another - and some of the travel here which goes further, the book taking on an almost fairytale feeling with the geography vague - it's not clear whether beyond London itself these worlds are the same as ours and the haze of uncertainty makes very real the conceit of slipping into alternate realities.

And of course we have magic, fighting, ships... an epic scale for this conclusion, picking up right after AGOS left off, with Rhy dying and Kell trapped, and romping through those 666(!) pages.

If the book starts with peril and jeopardy it soon ramps up even further as worlds are at risk - Red London but also our, Grey London. While the nobles who came to London for the tournament fret and bicker, a dreadful threat is arising...

Oh, and the language. Schwab has such a way with language:

"The truth had claws, and they were sunk into his chest..."

For sure they were!

"If she was careful enough, sharp enough, then nothing bad would happen..."

I know that feeling. It doesn't work.

Is Schwab out Stevensoning Stevenson?

In short, this is all you could possibly want or expect from the final part of the trilogy, and much, much more besides. An epic read, a truly great book.

For more about the book, see here. To buy the book, go to your local bookshop or buy here, here, here or even here.