Review - Kings of the Wyld by Nicholas Eames 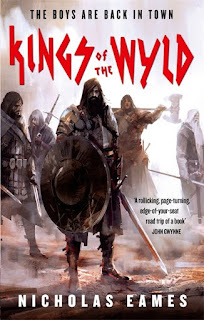 I'm grateful to Nazia at Orbit for a review copy of this book.

Guardians of the Galaxy meets Lord of the Rings in this rousing epic fantasy debut in which a retired group of warriors must get the band back together for one last seemingly impossible mission...

"The boys are back in town..." it says on the cover of this book.

Kings of the Wyld is rollicking, explosive fun from cover to cover. Starting quietly - Clay Cooper, retired adventurer and stalwart of the City Watch in Coverdale, is returns home from work to find an old friend waiting with a proposition - the book quickly accelerates like a great chromium plated monster on the road behind you. There is a Quest - Gabriel's (Cooper's friend's) daughter, who herself went off adventuring, is In Trouble, besieged by a horde of demons no less. There is the rest of his old band to be rounded up: Moog the magician, Matrick the king, Ganelon the warrior. There are foes to be fought or avoided: jealous ex wives and managers, bounty hunters, monsters of every shape and size. There are perils great and small - from robbers in the woods to the terrifying Rot.

And waiting at the end of a perilous road, there is Rose...

This debut novel is written with exuberance and elan. Always assured, Eames strikes the same balance as Pratchett at his best, drawing humour from the conventions and tropes of high fantasy while also clearly loving them - laughing with his characters, never mocking them. The book contrives to be, at the same time, very funny (as when Saga - Cooper's band - stride menacingly up a hill towards a foe - and then someone trips up) and very serious (addressing both the existence of monsters in the world - and this book has monsters everywhere) and mankind's monstrous treatment of them (death in the arena, anyone?) Even the kobolds are, at times, sympathetic.

Now, about that words, "band". The central conceit of this books is that the groups - bands - of mercenary adventurers, out to slay monsters and win treasure, are treated like rockstars. They have rockstar names - the Screaming eagles, the Sisters in Steel, the Wight Nights, Courteney and the Sparks - rockstar followings and travel on their "tours" in enormous wagons filled with illicit comforts.

And Saga were the best, the wildest, the most famous ever.

This is one of those ideas that sounds as though it won't work, as though it ought not to work but Eames exploits it brilliantly, again drawing out humour but also able to use the comparison to convey just how the people in his invented world relate to the "mercs", making it all real by drawing on a whole slew of implicit real-world concepts. It's brilliantly done and very believable, even as he brings in wyverns, two-headed Etins, flying ships, legendary weapons and a tetralogy of gods whose histories turn out to be curiously relevant to our heroes and their quest.

The characters are also vivid and compelling, both the members of Sags itself and the supporting figures - such as the cynical and light fingered "booker" who managed the band and seemed to take most of the money. The stand out is, though, Moog, magician, the one who - most of the time - knows what's going on better than the others (but only just). He's a rather vulnerable figure still mourning the death, years before, of his husband from the Rot and desperately seeking a cure. I want to read more about Moog.

It's a wonderfully immersive book, with our heroes facing thousand mile treks across evil forests, vast hordes of fearsome monsters, ancient evils and numerous reversals of fortune. Never less than gripping, the writing becomes truly compelling as the story comes to its climax. Can a group of ageing adventurers, beset by sore backs and wonky knees, still cut in today's brutal world? Will guile and determination be enough? or will they - as seems likely when, within a few miles of home, they're humiliatingly robbed - wish they'd stayed in retirement?

Just a super read, a really fresh book, one to savour from start to finish.