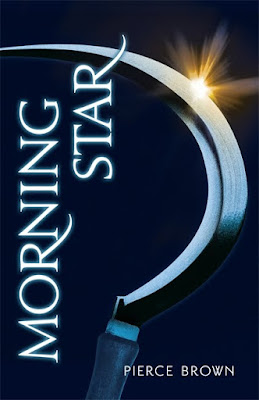 I'm VERY grateful to Hodder for an advance copy of this book.

Morning Star is the third volume in the trilogy that began with Red Rising and continues in Golden Son. It goes without saying that you should read those first. You SHOULD READ THEM. If you haven't, go away and do it, fastlike. And don't read any more of this review because there WILL be spoilers for the other books.

If you have read them you might want to re-read: much of the action in Morning Star depends on who betrayed who, in Red Rising and Golden Son; who is in uneasy alliance with who, and which characters hate each others' guts.

So. In Red Rising, Darrow of Lykos, a Red slave worker on a future Mars, joins the Resistance, the Sons of Ares after his wife Eo is executed, is Carved into a high-caste Gold, and fights at the Institute against the cream of Gold youth. In Golden Son he becomes lancer for a noble house and struggles to rise so that he can destroy the Society form within. That books comes with a real shock, which despite my warning above, I won't mention, but readers of the two books will be desperate to get their hands on this one to find out what happens next.

When the action in Morning Star opens, then, Darrow's world has been turned upside down, not for the first time, and he must - again, not for the first time - fight for his life, his honour, and the Rising that he so desires. For the first time, he is free of his role in Gold society - but at what cost? The events of Golden Son left him, his family and those he loves exposed: he has lost the fleets and followers he had began to amass: he doesn't lead the Rising and indeed finds himself jostling with his old friend Sevro. It seems that, as in Golden Son, he has more choices but that these can only bring him pain.

Yet Darrow seems to be growing up. He gradually admits that his motives for joining the rebellion are less pure than they might be, and that by fighting in Eo's name might have been hiding from the truth. An old enemy tellingly accuses him of having desired the power and world of the Golds as far back as the Institute.

Darrow may know himself better, but the central dilemmas of revolutionaries everywhere remains Overthrow the system and replace it with what? How to keep the support of those who benefit from the old regime while freeing the oppressed? When it emerges that the Sons of Ares has support from well placed members of the Society - who by no means want to see it thrown down and replaced by "demokracy" - it seems well nigh impossible to resolve the problem, even though Darrow is willing to make chilling sacrifices to do so.

This is a page turning, rip roaring book. Brown drives the story along at a terrific pace, whether he's describing epic space battles, close quarters combat - or Darrow's (and the other characters') emotional and moral turmoil. This is also an author who (as readers will remember) delights in wrongfooting you at every turn. There are jaw dropping PLOT TWISTS here, revelations and surprises which had me gasping. I hope nobody will spoil these: while I'm not normally too fussed about such things this book is definitely the exception and if spoliers do spread, trust me, you want to avoid them.

What else? Well, the writing is as good as ever. Just look at this: "I'm a bloodydamn Helldiver with an army of giant, mildly psychotic women behind me and a fleet of state-of-the-art warships crewed by pissed-off pirates, engineers, techs and former slaves." Or "It is one of the greatest victories in modern history, but victories are less romantic when you're cleaning your friends off the floor". And I could go on.

What it's not, perhaps, is diamond hard SF - if you're the kind of reader who gets fussed about the intricacies of anti grav, objects to the idea of an economy based on helium-3 or worries about the niceties of orbital motion, it may not be for you. But if you are that kind of reader and you also like a good story well told, on a majestic scale, with compelling characters and great prose, then you may, just possibly, enjoy it all the same.
Email ThisBlogThis!Share to TwitterShare to FacebookShare to Pinterest
Labels: 2016, Pierce Brown, review, SF