Review: Down Station by Simon Morden 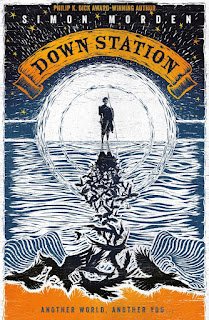 Anybody who uses the London Underground will, I think be intrigued by the premise of this book: that late one night a group of workers, threatened by a catastrophe, find a way out of the tunnels into a wholly new world.

The cleaners and maintenance crew - chief among them Mary, a young woman with a spotty past, Dalip, a young Sikh engineer and Stanislav - might be forgiven for seeing it differently. Yes, they have been saved from near certain death. But they've also been wrenched from their lives, from their families and the familiar and plunged into an unforgiving place. No running water, no electricity, no convenient shops. The emotional undercurrent of the book is driven by the tension: the freedom to be what and who you want - Mary slowly realises that she no longer has to answer to probation officers, employers or social workers - contrasted with the need to clothes and feed oneself, to protect others and - in a land with no authority, no law and no help - to protect others. Just how far is one entitled to go in doing that?

The book has, then, a very engaging and serious moral strand as well as the sheer sense of adventure that comes form exploring - and surviving in - a new land. As you would imagine, not all is well here: there are others in Down, as the place is called (a slight miss-step, that name, I felt, since it's only Mary's group who reach it from Down Station).

There are revelations about what the group are capable of - some rather wonderful discoveries about what they can become as well as some rather horrifying ones about what they are, or have been ("There are two kinds of men. Corruptible bastards and incorruptible bastards.") Morden has a knack for a telling phrase or description and at times, the book has a good line in graveyard humour as well as from Mary ("The East End had many dangers. Massive fuck-off dragons weren't one of them") who is also reliably sweary and defiant ("She'd settle this like a true Londoner, with fists and feet and nails and teeth").

It's not, as you'll have gathered, a book for those who are prissy about language, nor - and I don't think this is a spoiler - is it for the squeamish: there is a fair bit of death and dismemberment here. It is though I think in the end a balanced, nuanced, story with no absolute heroes and villains, but plenty of muddled, baffled people trying to do the right thing, to make their own history (Dalip to stay true to the ideals of his faith and the example of grandfather, Mary to overcome her past) but in circumstances not of their own making.

I enjoyed the book a lot. I think I'd have liked a tiny bit more if the opening section - in London - had been more substantial: the author showed such a good eye there for his characters and their setting that it would have been great to see more of London form his perspective before the plunge into the fantasy world. But that's really just my prejudice.

I will be interested to see Morden write more about Down. I hope he does.