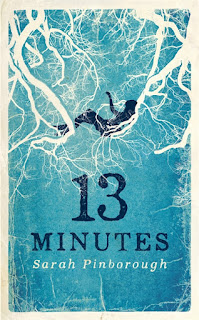 I'm grateful to NetGalley for an advance e-copy of this book.

Sarah Pinborough is well known as a horror writer. With recent books she has blended her horror with YA (The Death House), detection (Murder/ Mayhem and The Dog-Faced Gods) and even fairy stories. Now she turns more squarely to teenage life even than in The Death House.

You might think a story of a young woman who was drowned, died for 13 minutes but then returned to life would be a tale of darkness and haunting, and of course this is - but not in the kind of supernatural way you might expect. Pinborough continues to surprise, though, and you shouldn't take anything on trust: the group of teenagers affected by the events in this book may be ordinary but that doesn't mean everyone is happy, secure or - perhaps most of all - safe.

Tasha Howland is a successful girl, popular at school, leader of the cooler-than-cool clique known as the Barbies. So how did she end up, the middle of one night, in an ice cold river, clinically dead? 13 Minutes follows Tasha's attempts to rebuild her life and to make sense of what happened to her. The story's told from multiple viewpoints: mainly Tasha's onetime BFF Becca but we also see a lot of Tasha herself, of the detective assigned to the case, and of Becca's boyfriend. There are texts, transcripts of sessions with a counsellor, newspaper cuttings and excerpts from Tasha's diary. And it all comes together, oh so cleverly, oh so slowly. Pinborough has written a very clever book, on several levels.

First, she gets under the skin of the sixth formers - Tasha, her cohorts Jenny and Hayley, Becca and her uncool friend Hannah. The book revolves around them and to a great extent they form a little world of their own, looking out, everything seen through their motivations - rivalries, anxieties, popularity and unpopularity. There is history between them, but we only discover it gradually. The author was, I understand, a teacher and I'd guess a very good one - the observation and understanding here is razor sharp.

Secondly, she... oh I don't know if I should even say. No spoilers, but this book is tricksy. There are lots of narrators here, OK? Are they all telling themselves the truth all of the time? Are there things that are known but hidden, not referred to, lurking under the surface? Are there things, under the surface, that even the confident, sassy teenagers don't know about?

And then, the book is so skilfully plotted. It seems to be one thing and then something happens - you'll know it when you reach it, you might even see it coming a little way ahead and congratulate yourself, but watch out, it's the consequences that matter more than the event itself.

From that moment the rather careful choreography of the group of girls - not friends, but pushed into shifting alliances by the event that befall Becca - changes pace, as though a performance of Swan Lake suddenly turned into The Rite of Spring - and secrets emerge like little dancing devils. It becomes more and more clear that something is badly wrong, but Pinborough keeps a final understanding from the reader till almost the last page, when the book closes with frenzied action.

It is, I would say (as one who'd a long long way from teenage) a realistic, not moralistic, portrayal of teenage life. There's a bit of sex, there are drugs, but it's not a book about those things or their Dire Consequences: they aren't markers for Out of Control Youth or Moral Decay, just stuff the characters are coping with. If such things bother you, be aware.

Most of all though, it's a great read. Pinborough continues to delight her readers, refusing to be confined to simple genre categories and increasing her range all the time.

Goodness knows what she'll do next.