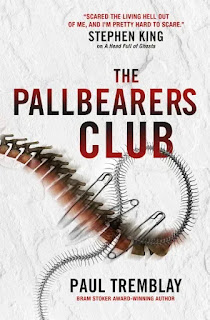 The Pallbearers Club
Paul Tremblay
Titan Books, 15 July 2022
Available as: PB, 288pp, e, audio
Source: Audio by subscription, advance copy
ISBN(PB): 9781789099003
I'm grateful to the publisher for an advance copy of The Pallbearers Club. I also read part of it as an audiobook.
The Pallbearers Club particularly lends itself to that dual approach. The story is told in, literally, two parts - fortysomething Art Barbara is (PURPORTS TO BE) telling his life story while another figure annotates the text with comments, objections (striking out "memoir" wherever it appears and replacing it with "novel"), critical analysis of the text, advice and, increasingly, a counter narrative.
In the physical book, this is done by handwritten annotations (including some doodles). In the audio, the commentary is portrayed by a female narrator (Gemma Carfi), her voice cutting in with among Art Barbara's (James O’Connell's) main narrative in a sharp counterpoint, creating the illusion - almost - of dialogue or debate. I have to say that the audio narration is just superb, O'Connell's narration, interrupted by Carfi's waspish observations (which start in the title page when she queries Tremblay's dedication) create a real sense of dialogue between the two.
Precisely how this second voice has access to Barbara's story [THAT's GOOD - A STORY CAN BE EITHER A MEMOIR OR A NOVEL] and why she chooses to contribute to it (and who she is) emerge slowly though the book. I don't want to preempt that, and I'll only say here that she has a stake in the whole enterprise. The fact is though that The Pallbearers Club has not one but two unreliable narrators. Not only do they mislead us, they also mislead each other, and in hinting at "Art Barbara" being a nom de plume, and via Ms Second Voice playfully threatening to unmask him and reaching out even to the title page - breaking the fourth wall in effect - we have a deliciously confusing metatextual tangle that leaves the reader questioning every page, every line. The reader can decide to trust one or the other of them, or neither, or try to construct an idea of "truth" from the interplay.
It ought to be simple. Art, a young man at highschool in 1980s USA, needs a bit of polish for his CV, so he starts The Pallbearers Club - a group that attends funerals of the lonely and the friendless. In doing so he meets Mercy, an enigmatic and self-contained woman who inducts him into the ways of punk - in particular, the local music scene, transports him in her battered orange car, and in one memorable scene, invades his family's basement.  Art's relationship with Mercy forms the core of the story [HA - "STORY" AGAIN! I APPROVE!] which is structured as three acts. There is the initial meeting and the period following it, up until Art's spinal surgery to correct his scoliosis at this point a horrific event tears them apart. Decades later, Art runs into Mercy again when he's living away from home grubbing for a living in a succession of no-hope bands. That also ends with a very strange episode, this time in Mercy's basement apartment. Finally, the two reunite in Art's home town where he has returned to live with his ageing, ailing mother after her divorce. [ANNULMENT!]
But really, things are neither pure nor simple. Art's perspective is influenced by Mercy's exploration of
an episode of New England history in which a grave was opened after suspicion that its occupant was rising at night to feed on her family. The book - Tremblay is of course a veteran horror writer - is therefore bedecked with call-outs to vampire mythology (as well as to popular music). Both Art's narration and his interlocutor's remarks are fully alive to this aspect, and actively comment on the resonances of it in Art's story, though they often disagree on its interpretation. This is only one of the way in which Tremblay leaves us with a myriad of alternatives depending not only on how welcoming we are of the supernatural but on our attitudes to the reliability of the different voices.
That ambiguity persists to the very end. Don't read this book expecting neat resolutions or clarity. Tremblay may have written a horror story (he's definitely written a horror story, if only in its bleak portrayal of Art's desperate health situation, caused by a country that refuses to meet its responsibilities to its people) but it's not a conventional one. You have to pick up the pieces and assemble them but many don't fit. And in trying to put them together you can't sidestep the deeply felt portrayal of Art's life - a very mundane life, a very ordinary man, but someone who evokes a great sense of sympathy as he flounders away trying to make something of his life, the firm landmarks of his childhood melting into the mist [NOT A FAN OF  THE PURPLE PROSE, TBH] and no adult consolations replacing them.
It's a read like nothing I'd encountered before. A novel [YES!] but also a memoir [NO WAY!] if a fictional one. I mean that this story of Art Barbara comes over as deeply realistic, despite the supernatural overtones, or maybe even because of them. A triumphant use of horror to show so much more of life than one could in a naturalistic novel, The Pallbearers Club will remain with me for a long time, I think.
For more information about The Pallbearers Club, see the Titan Books website here.
Email ThisBlogThis!Share to TwitterShare to FacebookShare to Pinterest
Labels: 1980s, 2022, horror, music, New England, USA