#Review - The Undertaking of Hart and Mercy 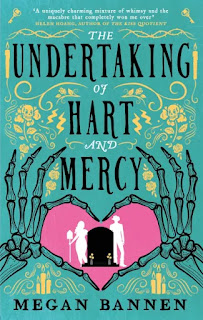 The Undertaking of Hart and Mercy
Megan Bannen
Orbit, 25 August 2022
Available as: PB, 418pp, audio, e
ISBN(PB): 9780356518664
I'm grateful to the publisher for an advance copy of The Undertaking of Hart and Mercy, to consider for review.
The Undertaking of Hart and Mercy is an entrancing fantasy/ romance/ Western(ish) story of mistaken intentions, overcoming obstacles and - in the proper place - intense sex.
Mercy Birdsall is an undertaker, the glue that holds Birdsall & Son (ha!) together following her father's heart attack and her brother's decision to abandon the family firm for other opportunities (it's not so bad - he can rustle up killer baked goods)..
Hart Ralston is a Tanrian Marshal, a loner much given - during his patrols out in the wilderness - to brooding on his past. Hart's task is to guard the strange alt-region of Tanria, formerly prison of the Old Gods, to prevent revenants from troubling the good folks of the surrounding lands. And to prevent the good folks from messing with Tania, because no good will come of THAT. (For Reasons, modern tech won't work in Tanria so it's a matter of horses, crossbows and campfires in there - giving this story that distinct Western vibe).
It would be an understatement to say that Hart and Mercy got off on the wrong foot when they first met, a couple of years ago. Perhaps they got off on the wrong set of legs? We gradually learn the story behind this, and can see the misunderstandings and misconceptions that occurred, but at the start of the book you just have to accept that the two hate and despise one another (so, yes, enemies to lovers may be hovering in the background). Bannen gets to the heart of this by having them correspond (unknowingly) so that we get a glimpse of the people they really are - or at least, the ones they would each like their anonymous penpal to believe they are.
If that all seems highly unlikely, well I suppose it is, but Bannen has a real trick for feeding one's willing suspension of disbelief. It may be because the characters themselves are down to earth and so emotionally credible, or it may be that the setting - while fantastical - is so well established with its own quirks and features. (Although not stated explicitly, everything is very aquatic, with amphibious vehicles, a "dock" at the back of the undertaker's business, and a whole religion based around the concept of the "salt sea" - for example, Hart & Soon makes "boats" for the dead, not coffins - which totally convinces).
Or it may just be that, gosh, can Bannen just write! I wanted to know how the story twists would unfold - how the family crises, the dire financial state of the business, and Hart's burden of guilt and shame - would play out. I wanted to know whether, and how, Hart and Mercy would get together. And I just wanted more, more domestic details, family wrangles and business crises.
There is a wider mystery as well, with the numbers of those reanimated "drudges" on the rise, and their danger correspondingly increasing. In a world where demigods walk, you'd think that matters of the - er - heart would take second place to such grand fantasy, but no, The Undertaking of Hart and Mercy is refreshingly domestic and persona in its focus, making it - to me - a rollicking good story. It's one written with verve and wisdom, and lots of humanity.
I would recommend.
For more information about The Undertaking of Hart and Mercy, see the publisher's website here.