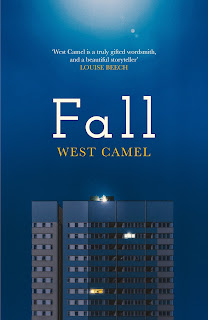 Fall
West Camel
Orenda Books, 9 December 2021
Available as: PB/ independent bookseller HB edition, 323pp, e, audio
Source: Advance copy
ISBN(PB): 9781913193928
I'm grateful to Karen at Orenda Books for an advance copy of Fall and to Anne Cater of Random Things Tours for inviting me to take part in the tour.
Fall is set mainly on the fictitious Deptford Strand Estate in London. Designed by idealistic architect Zoë Goldsworthy in the 60s to permit - or require - a 'new way of living', by 2021 it's fallen on hard times and is being reworked, the Marlowe Tower in particular into premium, exclusive apartments.
The redevelopment has split the Goldsworthy family. Zoë's twin sons twins Clive and Aaron are intimately connected with the project, Clive as head of the development company, Aaron, a resident (the only resident) of Marlowe Tower, bitterly opposed to it and - when the book opens - holding up the project. Whether this is out of respect for his mother, spite at Clive or simply because he doesn't want to move out isn't clear.
The antipathy between the two men goes back more than forty years, to the scorching summer of 1976, when the estate sizzled and anger rose among the (white) residents because of the arrival of two young Black women, also twins. Not that anybody on the Deptford Strand is 'racialist', oh no - they just don't like outsiders...
In the quartet of Annette, Christine, Aaron and Clive, West creates a complex, simmering group among whom stresses arising from racial discrimination, coming-of-age, and the intricacies of twindom arc like lightning at the end of an overheated day. The double timeline particularly brings this out as Camel is able to examine the attitudes of the 70s from the point of view of the present day, casting additional light both where behaviour was unthinking (the language of the police, the prejudices of the estate residents) or where it was analysed and judged at the time.
Race isn't the only prejudice visible here. Once the estate was complete, Zoë moved her two boys from leafy Blackheath into a flat in the 24th floor of Marlowe Tower (where, four decades on, Aaron still lives). Outwardly an egalitarian gesture - Zoë argues that she should be willing to live anywhere that she designed - there does also seem an element of patronage and even control as, over subsequent years, she seems to see in herself the leading figure on the estate. And despite living alongside the working class residents, Zoë still sends her boys to distant schools rather than the one she designed, and mixes mainly with her own middle-class friends (who make visits akin to anthropological field trips).
One senses that the dislocation of that move, at the age of ten, still rankles with the boys, despite their outward devotion to their mother. As the events of the story unfold, they have just reached eighteen and are beginning to separate from one another, a painful process (though one Camel depicts very subtly) made more painful by some shocking discoveries and twists in this story. In some ways the wounds of that summer will never heal, with Aaron and Clive still estranged even before the redevelopment is proposed - and their relationship with Annette and Christine is part of that breach. Delicately exploring issues of intention, (mis) communication and the search for redemption, this is a fascinating study. There are some dark themes and incidents but none of them are gratuitous and West uses the eccentricity of Zoë's architectural practice to lighten the mood when needed. Apparently seeing the place as much a playground for her kids as a place for people to live, she designed it with a full complement of hidden doors and secret corridors, allowing access (for those who know) via shortcuts to most of the estate. A fun idea - but again one that seems to declare a sense of ownership, a right to dictate who goes where and how.
Fall is, like West Camel's Attend (shortlisted for several major awards) something of a study in secrets, the private routes and spaces of the estate echoing concealed corners and bits of private history in the lives of the four protagonists. As the estate is torn down and reshaped, the hidden will inevitably be brought to light - as, it seems, will the true events of 1976. Will that be a traumatic revealing, with dust and rubble everywhere? Or will letting sunlight into those unlit places clean and heal?
Never less than grabbily readable, Fall is an exploration of the recent past and our relationship with it. It's a book I'd strongly recommend.
For more information about Fall, see the Orenda Books website here as well as the other reviews and stops on the blogtour listed on the poster below.
You can buy Fall from your local bookshop (a gorgeous independent bookseller edition is available!) or online from Bookshop dot org, Hive Books, Blackwell's, Foyles, Waterstones or Amazon. 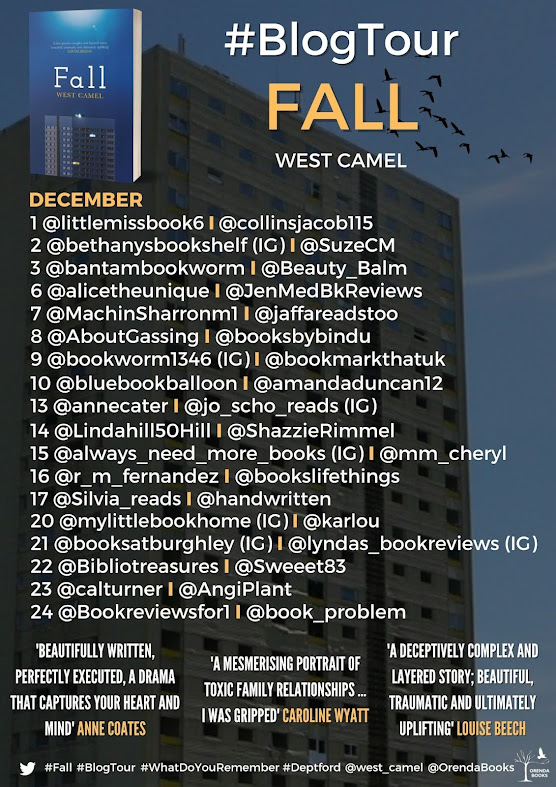