#BlogTour #Review - The Wildest Hunt by 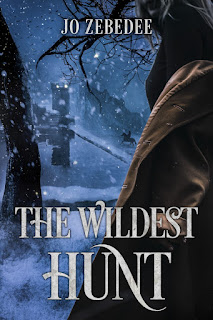 I'm grateful to Inspired Quill and to Anne Cater of Random Things Tours for an advance e-copy of The Wildest Hunt and for inviting me to take part in the book's blogtour.

Amelia, a struggling young artist, thinks she's struck lucky when a mysterious, wealthy client offers her £15,000 just for one painting. Enough money to sort Amelia and her boyfriend Joe's debts, maybe even replace their wreck of a car.

The only catch is - Jean wants the painting of remote Glenveagh Castle in Donegal to be done over Christmas. Tempted by the prospect of spending the alone time at Jean's remote cottage, and imagining a romantic, cosy time together, Amelia and Joe instead find themselves isolated in the worst winter anyone can remember with no power - and something has noticed them...

There's a time-honoured link between Christmas and the supernatural (as I write this, I'm preparing for a trip to see A Christmas Carol tomorrow) and it's one Zebedee draws on in The Wildest Hunt, blending the season of cold and darkness with powerful, mythic themes: not only the ancient entities that haunt the Glenveagh estate, but also a lost child, the propitiatory sacrifice of an innocent, and a greed for power and control. All of these play out in both of the couples about whom the story revolves - Amelia and Joe, and Jean and her husband Robert.

Amelia isn't exactly a stranger to the uncanny - she's had disturbing experiences before, and at the start of the book, we see another one. It's not something she actually wants to explore. However, she may not get to choose - the powers rising here are cunning and Amelia's weakness may be Joe, something of a reformed bad boy with whom she's very happy but who may be just a bit too enchanted by the atavistic threats awaiting here. The tension thrums as the story unfolds, Amelia perturbed by the reactions of her partner and unsure how far she can trust him.

There's a similar tension in the relationship between Jean and Robert, although for them, things have already been soured by Jean's suspicions about events forty years ago at Glenveagh. Zebedee's portrayal of the marriage here is stark - two people who seem to at best dislike, at worst hate each other, but who remain tied together as much by bitterness and suspicion as by circumstance. The darkness of Glenveagh will be eager to exploit this rift, posting the question, what does Robert really want?

I loved the way that Zebedee uses the relationships between these four people to sound the depths of the ancient darkness that confronts them. They face a struggle at two levels - understanding the supernatural forces that threaten, and keeping a hold on their humanity, their love, to resist those forces. With almost no other characters featuring for more than couple of pages, it's an intense, emotional read, the coldness without only endurable because of odd moments of inner warmth, alongside the short respites from that coldest of winters which Zebedee allows her characters.

A truly chilling read in every sense!) strongly recommended for the fireside on an iron-hard night, a book with both complex and intriguing characters and real sense of place - as well as an absorbing and knotty plot. But if you stay up late to finish it, don't blame me if you think you hear hoofbeats snd something snuffling outside...

For more information about The Wildest Hunt and Jo Zebedee, see Jo's website here, the publisher's website here and the stops on the tour, listed on the poster below.

You can buy The Wildest Hunt from your local bookshop, or online from Hive Books, Blackwell's,  Waterstones or Amazon. 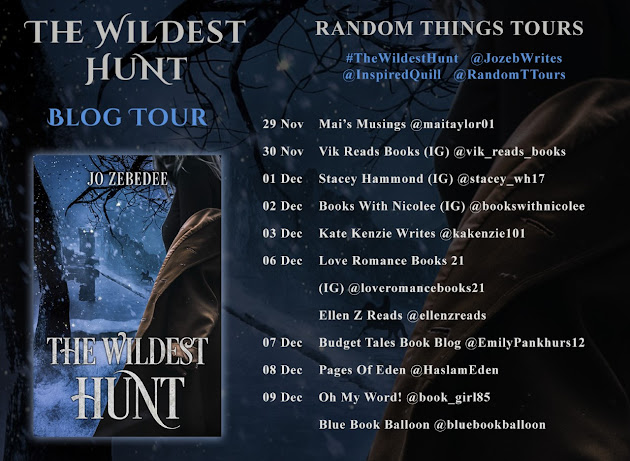