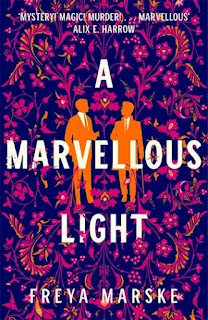 I'm grateful to the publisher for an advance copy of A Marvellous Light to consider for review and to Black Crow PR for inviting me to take part in the tour.

A rather magnificent queer romance with magic, A Marvellous Light takes us into an alternate Edwardian age where aristocrats weave spells at house parties, suffragettes chafe against the constraints of society, and dark forces seek powerful artefacts...

Sir Robin Blyth has recently inherited his father's baronetcy on the death of his parents. He's actually inherited little else, the family fortunes having been squandered in social climbing, and to make ends meet, he has taken a job in the Civil Service.

Unfortunately, this turns out far from the sinecure Robin might have hoped for. The Office of Special Domestic Affairs and Complaints is, it seems, the British Empire's own liaison with the world of magic and Robin's been placed there to replace the luckless Reggie Gatling, missing in suspicious circumstances. Before he knows what's hit him, he's under attack from faceless men - and strangely attracted by Edwin Courcey, his counterpart in the hidden world.

Courcey is a prickly, cold and reticent man, one who's been taught to bury his feelings deep, but something in him sparks at Edwin.

These two awkward and shy men soon find that to survive they need to depend on each other. Edwin is all the help Robin will get with the magical forces now pursuing him, and Robin holds the only clues Edwin will get about what happened to his friend Reggie. So the two bicker along, introducing each other to their respective worlds as they race against time to understand a creeping curse.

I loved Edwin and Robin. Their reticence and defensiveness at first make this seem like Pride and Prejudice squared, but Marske soon shows how much of it proceeds from their being gay in a world that would persecute them for what they are. Yes, defensive instincts are all to the fore but it's because any moment of weakness - any confession of what they really feel - could be catastrophic. What follows is a measured and careful dance, interrupted by volcanic bursts of emotion - not just romantic passion, but fear, jealousy, despair. Edwin's awful family doesn't help: almost all better magicians than him, they're inclined to treat him with bored tolerance at best, scornful bullying more often.

You may, of course, guess how things will end up - I hope it's not too spoilery to say that there are, eventually, some very steamy scenes indeed. But that doesn't mean everything's done and settled. These are complicated men, thrown into an imbroglio of secrets, betrayal and lust for power. Much, much more is at stake than their personal happiness. If they make mistakes as they negotiate that tension, they risk death, ruin or, perhaps worst of all, being made to forget what they have found in one another. the stakes are certainly high.

Secrets are laid bare on many levels in A Marvellous Light. Most obviously, there's the process of "unbushelling", the revelation to a non-magical person of the hidden powers and abilities that exist in the world (the name coming form the Biblical reference to hiding one's light - the marvellous light of the title, perhaps - under a bushel, a container for grain). There's Robin and Edwin's sexuality, hidden from society and, at least initially, from each other. There's the revelation to each of them what the other is, or might be. And, more prosaically, there's the exposure of a fiendish plot that could endanger all magicians. And this is only the first in a series of books - who knows what secrets await?

This mannered and passionate book comes as something of a breath of fresh air in fantasy and introduces a pair of fascinating and deep characters who will I hope appear again soon in what is sure to be a successful and fun series.

For more information about A Marvellous Light, see the publisher's website here or the stops on the blogtour listed on the poster! 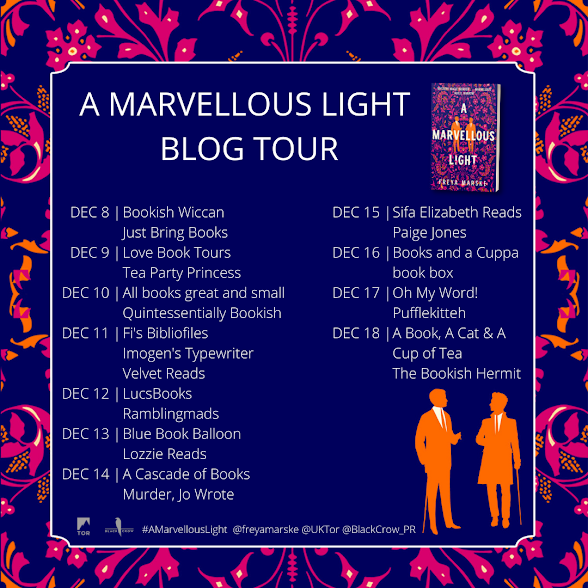