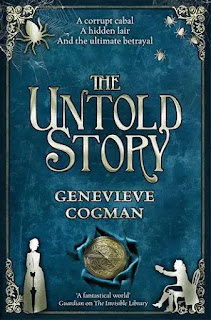 I'm grateful to the publisher for an advance e-copy of The Untold Story via NetGalley.

So, after eight volumes, The Invisible Library sequence reaches an end. Or a pause. While I would gladly read a new instalment in this series every year until the last syllable of recorded time (I think I may have fallen just a teeny bit for Irene, Librarian, Thief, Spy, and Assassin) an author will understandably want to explore new characters and themes. All good things come to an end.

In the case of The Untold Story, though, they come to a good end. The books have always been balanced between Irene's derring-do retrieving (stealing) books for the Library - which, in traditional style, we see more of as this instalment  opens - and wider Libraryverse politics, which dominated more as the series grew longer. Cogman cheekily makes this shift the hinge of The Untold Story: haven't you noticed, various characters mutter darkly, that the Librarians have been more and more involved with treaties and talks, and doing less actual book stealing? Why might that be?

This sets the scene for what was always bound to happen - an adventure that doesn't deal with an external situation but instead delves into the ancient secrets of the Library itself, its origin and purpose and what the guiding hand is that keeps it on course. In a moment of crisis, there is dissent among the Librarians. Irene's mentor, Copelia, is dangerously ill and others - whom Irene likes much less - are giving the orders. Who is she to trust? In a real sense we see Irene growing up here, forced to make her own decisions not just about how to fulfil a duty assigned to her but about her values and her loyalty and how far she is prepared to go for them.

The book focuses, more than any adventure to date, on Irene's own past and her connections to Alberich, the greatest traitor in the history of the Library. Its tone is, I think, subtly different to the previous stories - less of a heist, less of a trail of chaos through the worlds (though, be assured, there is plenty of action) and more introspective, more tricksy, perhaps. The landscape is shifting, ancient truths coming under question, and the Library's justification for its existence is somewhat wanting.

Against this background, of course Cogman gives us lashings of what we've come to expect: here is Vale, the Great Detective, ingenious, methodical and deeply moral; here is Kai, dragon prince and Irene's lover, impulsive, and struggling as ever with the tension between personal life and family duty; and here is Catherine, Lord Silver's Fae niece, with her own mysteries (actually perhaps I thought she might have done a little bit more here, but she's still very young). And of course Silver, that archetypal seducer and all round cad, plays his part too, to my great satisfaction.

All in all, this book rounds off the series so far with great flair and it will delight everyone who has been following the series. If you haven't, this isn't the place to start, you need to go back to The Invisible Library and read them in order, but doing that will be a treat, not a chose. Maybe*, like me; you'll read the first book on the Eurostar to Brussels and get glitter all over your business suit and not care? Or maybe you'll read it at home after your family have decided your cryptic hints about what present you want?

Either way, the important thing is to read it, and to read the other six books, and then to read The Untold Story.

For more information about The Untold Story, see the publisher's website here.

*Possibly not, as trips to Brussels are probably less likely now because of Your Know what and also the other You Know What? And for all I know the publishers have managed to make the covers less glitter shed-y? I hope not though.