#Review - Under the Whispering Door by TJ Klune 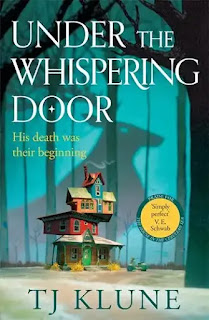 I'm grateful to the publisher for an advance copy of Under the Whispering Door.

Price was dead, to begin with...

TJ Klune casts light and wisdom on the mysteries of life and death in this engaging new novel.

Wallace Price would not be anyone's idea of a sympathetic boss. Seen early on in Under the Whispering Door firing an unfortunate employee whose life problems are affecting her work, he is driven, unempathetic and demanding. So it's hardly surprising when, after his sudden death, only a handout of people attend Wallace's funeral. Wallace himself IS surprised by that: but more at having actually, you know, died. Basically he's having trouble accepting this whole "deceased" thing and so a Reaper has to be despatched to escort him to - well, we'll come to that.

Yes, there are overtones of everybody's favourite spooky Dickens novel here. Like Scrooge, Wallace wasn't always a work-obsessed misanthropist: like Scrooge he knew love, but it turned sour on him. But there are also differences. Wallace isn't quite the caricature that Scrooge is. And while Scrooge was offered visions of what may come - including the prospect of going to the grave unmourned and unsung - and time to amend his life, no such luxury is accorded Wallace. His time's up, and he's out.

The biggest difference, though, lies I think, in the dynamics of what happens after Wallace's death. In many respects, his life only begins then. Accompanied by reaper Mei (pronounced "May") whose first gig this is,  Wallace is led to a teashop, run by Hugo, also inhabited - haunted? - by Hugo's dead grandfather Nelson and dead dog Apollo. The teashop - Charon's Crossing - isn't some weird borderland thing, it's an actual, genuine teashop serving a range of infusions to the customers as well as home made scones and other baked goods.

(I need to stop here to smile for a moment over what are clearly difference between the associations of "teashop" in the US and the UK. From the reaction Klune puts into Wallace's head, Over There it has clear overtones of aching hipsterdom, while this side of the Atlantic one thinks of crumbs, chintz and copper ornaments, also probably steamed up windows and rain).

Actually Charon's Crossing DOES have some weird borderline characteristics. It hosts The Door through which Wallace and his fellow deceased will eventually travel (to where? we never learn). It also holds those who need to spend time reconciling themselves with the fact of death, or with the way they spent their lives. And it provides a locus for all kinds of half-and-half entities to mingle with the living - such as those who rejected the idea of death entirely and lost themselves under the winnowing forces of the mundane world.

Yes, there is some spooky stuff here, but it doesn't dominate and, honestly, it was a breath fo fresh air to read a novel with such a definite, unambiguous fantasy setting but which doesn't all turn on some threat to the nature of reality, or an evil plot by beings from Beyond to conquer the universe. Instead, we get tea and chat and honest, often painful, character development. I know that won't perhaps be everybody's cup of tea (pun intended) but it is done so very well here and really grabbed my attention and sympathy. At Charon's Crossing, the focus is on being, not doing. And - to let a bit of a spoiler slip - the being is especially focused on Wallace (who, is, of course, dead) and Hugo (very much alive), with a thread of romance between these very different men. And of course some definite obstacles in the way.

Quite how Klune orchestrates and explores this theme, I won't say any more about - first because it would be spoilery and secondly, because it would only clumsily sum up what's set out much better in the book, and why do that? But it does involve human loss, a vengeful ghost, a podcasting medium and a besmitten public health inspector, creating a darkly comic plot that surrounds the central romantic one, so there is a lot here to hold the attention.

What you need to do then, is, to put the kettle on; warm the teapot; cut yourself a slice of cake; settle down, and read Under the Whispering Door. You won't regret it...

For more information about Under the Whispering Door, see the publisher's website here.