#Blogtour #Review - Far From the Light of Heaven by Tade Thompson 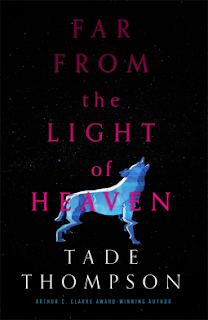 I'm grateful to the publisher for an advance copy of Far From the Light of Heaven to consider for review, and to Tracy at Compulsive Readers for inviting me to join the blogtour (in fact, to close it off).

I'm having to be very careful writing this review, perhaps more careful that I would normally be since I am not just worried about upsetting people with spoilers but also about not creating a misleading impression for the book. I suspect that's a concern that Thompson himself shares because in the Afterword he explains that he doesn't consider it a space opera (albeit it takes place, mostly, in remote space aboard spaceships). I'd concur with that.

I'd also add that neither is it really a "locked room" detective story. One might jump to that conclusion, as a crime is committed, on an isolated ship, with a limited roster of suspects and a detective - of sorts - is dispatched to resolve it. However, Thompson robustly - almost gleefully - refuses to go through with the dance moves you'd expect for a locked room mystery. Yes, Fin is an isolated, washed-up investigator who has been suspended form duty, lives in a domestic tip and now has One Last Chance at redemption. Yes, he does insist on procedure, against the protestations of Shell, Captain of the ship Ragtime. Yes, there are inferences and red herrings. But - slight spoiler perhaps - Fin doesn't reason his way to the heart of a fiendishly complex mystery and announce it in a dramatic conclusion.

Rather, as we move into the endgame of the story, we're given an account of what actually happened. By this time it's fairly clear that the immediate heart of the matter is more about survival in space and the dangers therein - albeit the motivation behind the crime creates a potent threat to that survival. But also that Thompson is using Fin more as a chorus or commentary to cast light on the deeper story (behind the survival theme) than him being the focus of the story itself.

I have, rather ploddingly, spelled this out because I have seen online reviews of the book which I think came away slightly disappointed, or perhaps perplexed, because they were trying to fit this book into a different template. I could make the point more bluntly by citing one very well known classic SF novel which nobody would ever try to approach in that way, but doing so would probably cross the line into being spoilery so there I will leave it.

Having got all that out of the way, what do we have in this book? I found three elements of the story particularly notable.

First, as a survival story, Far From the Light of Heaven is absolutely top class. Shell, the human captain woken from ten years of sleep when something goes wrong aboard Ragtime, is an excellently drawn character. She's strong and prepared but trying oh so hard to keep her doubts and fears in check, alternately helped and hindered by the necessary routines of life in space - necessary to remaining alive, that is. It's her first mission. She trained for years in the knowledge that she would only be aboard the ship as a backup, in case something came up which the AI systems can't handle. Her family background and motivations - including a missing space hero father - are described, and we then see her forced to step up, having to make myriad crucial decisions not only to discover what has gone wrong but to try and preserve several hundred lives aboard the ship. The technical stuff here is first rate - kind of like The Martian but with higher stakes and greater danger - as is the humanity of our Captain, notable in a story which also involves significant portrayals of AI. I also enjoyed Shell's relationship with Fin: both professional and rivalrous, as they have slightly different interests, backgrounds and goals.

A second strand was the background of the voyage, one of merciless plutocrats directing space exploration from afar (we briefly meet the richest man in the Galaxy). It is an interesting thought experiment how these Earth-grown tyrants relate to their distant empires, and how the inhabitants of the planets, colonies and stations feel about that. At one point in this story there's something like a popular show of protest against the behaviour of the trillionaires - something that Thompson leaves to us to decide whether or not it will come to anything, or indeed, is justified in the particular circumstances.

The third element that grabbed me in this story was the one I'd ideally have liked more of - the background and personalities on the space station Lagos, which Ragtime visits some time before the fatal events. Lagos's identity, and its crew/ inhabitants, explicitly recognises that the spreading presence of humanity in distant space is not just about White Americans, but that other cultures have also travelled to the stars. That sets up some promising potential conflicts, and Thompson introduces us to a range of characters, a couple of whom do travel to the Ragtime and intervene (kind of) in the central plot. However I felt that we could have heard far more about Lagos, and I got a definite sense that Thompson could have done that, albeit it would have been a longer book. In the event I wondered if Far from the Light of Heaven might best be seen as establishing a setting within which further adventures can take place? I would welcome that, although I think there's always a risk when work is being done here establishing that setting, work will only really pay off properly if more books do follow.

Which is, kind of, why I'd refer back to what I said earlier - approach this book with the right mindset. I think it is a fascinating introduction to a remarkable universe, and I'd like to read more about that. More, over and above my own selfish motivations here I think this kind of risk-taking deserves to be applauded, both by the author and by the publisher, and it deserves to succeed.

For more information about Far From the Light of Heaven, see the Orbit website - as well, of course, as the other stops on the tour, listed on the poster below.

You can buy Far From the Light of Heaven from your local bookshop, or online from Bookshop dot org UK, Hive Books, Blackwell's, Foyles, Waterstones or Amazon. 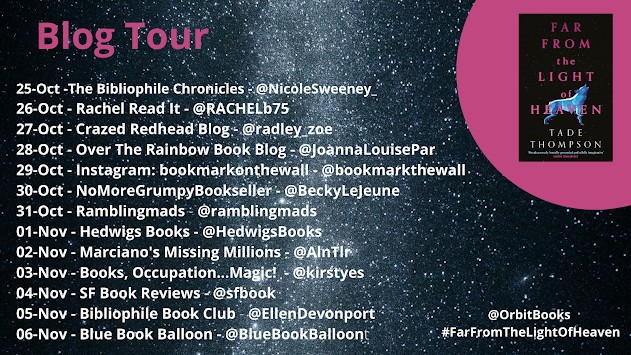