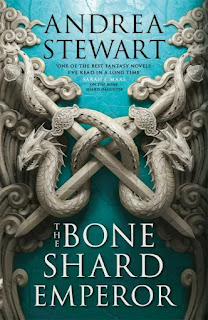 I'm grateful to the publisher for an advance e-copy of The Bone Shard Emperor via Netgalley to consider for review, and to Tracy Fenton of Compulsive Readers for inviting me to take part in the blogtour.

The Bone Shard Emperor picks things up almost where The Bone Shard Daughter left them and, yes, I really think that before reading this, you should read the earlier book, if you haven't already. Some series you can pick up the middle, but not this one, and the reason goes to the heart of why it's so compelling. Quite apart from simply understanding the plot detail - something I don't think is that important - you need the context to really appreciate the characters here.

Lin, for example, is now Emperor, having killed her corrupt and abusive father, but she's struggling. She really wants to be a better Emperor than her father. In the previous book we saw what he made her and how he treated her, and that is central to her struggles to be herself but also to understand him (which itself risks her becoming more like him). In The Bone Shard Emperor we will see that tension play out, and the danger that Lin courts. Apart from the forces that shaped her as a person, she's inherited a volatile political situation. Her rule isn't absolute: the islands making up the Empire have their own Governors, who consult their own interests first. There is rebellion in the air, and in a series of catastrophes, islands have begin sinking for unknown reasons.

Similarly, notorious smuggler and folk hero Jovis is now Lin's Captain of the Imperial Guard, but his loyalties are conflicted. Stewart's writing here is deft and her characterisation subtle: Jovis is far from loyal to Lin, retaining affiliations both with the Ioph Carn crime syndicate and with the Shardless Few rebels. It would be easy to hate Jovis for what seems like betrayal (it IS betrayal) but if you travelled with him through the earlier book you will understand what he was trying to achieve and the hopes and fears which he still has, and will sympathise with, if not perhaps forgive, him.

Again, the enigmatic exile Nisong, who spent most of the first book enslaved and befuddled by 'mind fog' has now woken and is visiting a terrible revenge on the Empire. In many ways a hateful character, Nisong has suffered greatly, and using her, Stewart shows how abuse and betrayal can feed on itself - just watch her justifying what she is doing, blaming the innocent who she destroys for the deaths of her friends in the bloody rampage. Again, Stewart's characterisation is chilling and convincing.

The other main characters here, island governor Phalue and her wife Ranami, perhaps need less backstory - their loyalties were more conflicted in the earlier book and things are simpler in this one: Phalue is trying, in a similar way to Lin, to be better, to raise up her people, and she confronts many of the same problems as Lin in establishing her authority, introducing radical change and dealing with the horrors left by Lin's father, the wild 'constructs' which previously controlled and administered the Empire. Lin and Phalue contrast nicely, Lin having forsworn the bone magic that drives the constructs, thereby leaving herself vulnerable, Phalue resorting enthusiastically to her sword and armour in a most un Governor-like way and rather relishing her hands-on exercise of power.

This book was full of characters I wished would join up, get on, and work together. Lin and Phalue could complement each other so well. Phalue would make a much better Captain than spy/smuggler Jovis. Jovis and Lin, in turn, clearly fancy the pants off one another, but they are held apart by all sorts of formalities and conventions as well as what they don't know about each other. It's frustrating, but Stewart has written a story that captures the nuances and contradictions of these characters extremely well, so that although there are all sorts of catastrophes, rebellions and magical weirdnesses breaking out, it's the central relationships that really drive the plot, adding a sense of peril and risk - as though everyone was on a high wire and might fall of any time - that keeps the reader turning the pages.

A potent blend of politics, magic, warfare and romance, The Bone Shard Emperor fully lives up to the promise of The Bone Shard Daughter, giving us plenty of action and mystery and, best of all, more of the strange creatures Mephi and Thrana, whose nature is now a little clearer. There's also a new character, Ragan, a mysterious warrior-monk who confounds stereotypes (you'll have to wait, no spoilers) and makes Jovis VERY jealous when he gets close to Lin (great fun to observe).

In short, if you've read The Bone Shard Daughter you'll love this sequel, if you haven't read that book I hope I've inspired you to go and do so - before moving on to The Bone Shard Emperor next.

For more information about The Bone Shard Emperor, see the publisher's website here and also the other stops on the tour, listed on the poster below. 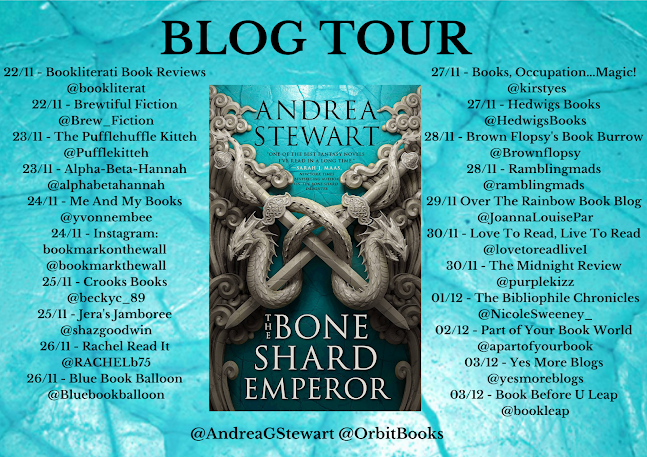