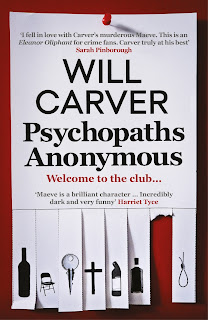 I'm grateful to Orenda Books for an advance review copy of Psychopaths Anonymous, and to Anne for inviting me to take part in the blogtour.

Will Carver is, I think, one of the most distinct novelists that I've encountered recently. His books form a meticulous catalogue of the vices and failings of contemporary humanity, which sounds depressing and tedious, but they are the very OPPOSITE of that. These compelling, readable books are a sort of ethical noir, going to dark places to show us ourselves. His characters may be appalling people doing terrible things, but they're still people one can relate to - albeit this may be a troubling (self) judgement on the reader.

Psychopaths Anonymous follows in this tradition and I think it may actually be his best yet.

Maeve is a psychopath. She makes no bones about the fact - the book, which is written in her voice, presents the fact calmly, without debate.

Maeve is also, I think, as depicted here, an alcoholic, something she is less ready to accept, and possibly a sex addict besides (there's lots of sex in the book).

Maeve is part fascinated, part appalled by the Alcoholics Anonymous, 12-step process. Much of the book focusses on her visits to a succession of AA groups and her careening off the various stages of the process. Carver pays this whole phenomenon the compliment of a deep, skewering analysis that systematically deconstructs its dependence on religion, highlighting the uneasy contradiction of acknowledging an omnipotent and vengeful deity while seeking strength within oneself to overcome addiction.

Before I go on, I should perhaps declare an interest here as the husband of a Church of England priest. Having done that, I would point out the conception against which Maeve is so strongly rebelling - the controlling, angry and manipulative God - is not by any means a universal conception of religion. I'd go so far as to say that it is a heretical and abusive presentation of my faith and something that any decent human being ought to reject. It is, however, sadly, a common one, humanity being so prone to project and deify its own faults, and Carver's righteous anger at, and rejection, of this monstrosity comes through sincerely and clearly in Maeve's uncompromising refusal of it. Maeve is actually a wonderfully drawn and vivid personality all round, though her attendance at so many AA groups, whose basis she hates, is to begin with something of mystery. (It does become clear).

She's not a wreck of a person, she holds down a responsible job (in marketing) and is very self-aware both about her drinking and her sex. And, as the story spirals on its way, also about her putative psychopathy - an aspect of her personality that she doesn't wish to "cure" but to learn to live with. To this end, she establishes her own self-help group, "Psychopaths Anonymous" (though they're careful not to use that name too widely). The commentary that this book provides on different means of exploring, and living with, one's self is truly illuminating and to my mind showcases (ironically, given the subject matter) Carver's empathy for and understanding of his characters.

But there's more! Maeve is on something of a journey here - readers of Good Samaritans, Carver's first novel with Orenda, may well recognise her and know where it is going to end as a new man comes into her life. Seth seems to provide some relationship ballast (even as the sex becomes more intense) although the presence in Maeve's life of an enduring boyfriend only makes that life more complicated. An ongoing theme here is just how far Maeve is really on top of things - do bear in mind that she is the one narrating the story, and she isn't exactly a sober citizen - and the presence of a man in her life raises the stakes in that respect, Carver perhaps hinting that she isn't as in control as she thinks.

Not a book for the squeamish, as you might expect, Psychopaths Anonymous nevertheless feels like a story with a firm moral centre. It's a vividly told story, one that will have you paging back and forth to check details (there are a few secrets that readers of the other novels in the Carververse may also decode...) While fairly short, it takes on gigantic themes and nails them brilliantly. I was just bowled over.

For more information about Psychopaths Anonymous, see the Orenda Books website here - as well as the entries on the tour poster below! You can buy Psychopaths Anonymous from your local bookshop, or online from Bookshop UK, Hive Books, Blackwell's, Foyles, WH Smith, Waterstones or Amazon. 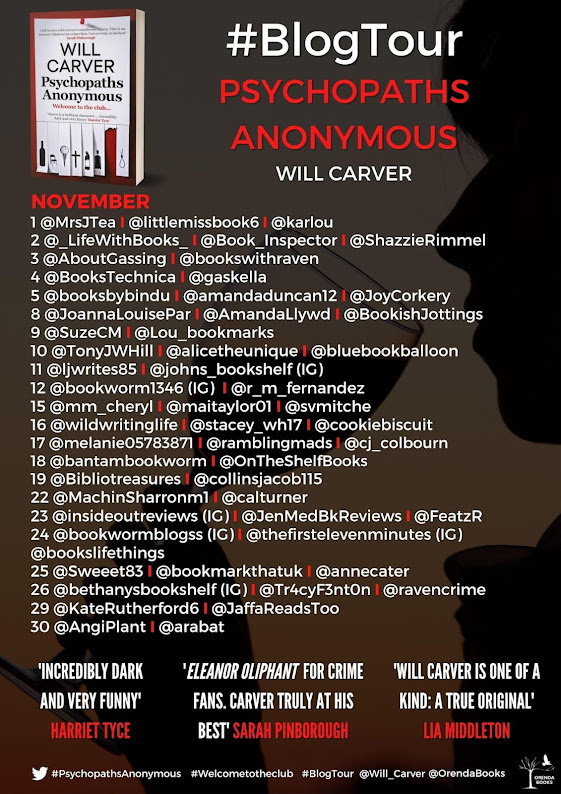