The Commandments
Óskar Guðmundsson (trans. by Quentin Bates)
Corylus Books, 29 October 2021
Available as: e-book
Source: Advance copy
ASIN: B09H1GJ323
I'm grateful to the publisher for an advance e-copy of The Commandments to consider for review, and for inviting me to take part in the book's blogtour.
Corylus continues to bring excellent European fiction to readers of English, with The Commandments being the first of Óskar Guðmundsson's novels to be published in English. A standalone featuring former detective Salka Steinsdóttir, home in Iceland from the UK amidst a messy divorce, I can see this kicking off a series if Guðmundsson wants to do that - I would love to find out more about Steinsdóttir, a rather effectively rendered and sympathetic central character, and her background. That said, be prepared for some darkness. The present-day events of The Commandments - a series of gruesome torture-murders - are grim enough, but the history in which they're rooted point to disturbing events in the recent past and, perhaps even worse, to ongoing collusion and collective silence about those events.
The opening of the novel reflects both those strands. After a disturbing intro, set in 1995, we're introduced to Steinsdóttir on a fishing trip, staying near (but not with!) her parents. Guðmundsson makes clear that there is some private trauma or conflict going on - Steinsdóttir's father is ill, but there seems to be more to it than that. Soon, she is approached by the local police, who are short-handed, to help out with the investigation of a cold-blooded and sadistic crime and of course - and fortunately for us! - she eventually agrees. To a degree this all seems very informal - Steinsdóttir has been working with the Met Police in London and apparently has a formidable reputation, and she was in the Icelandic police before, but still, there is an impressive lack of bureaucracy to this appointment (and perhaps, consequent sulking from some of the new colleagues).
Never mind. The story takes off from here, deftly blending a number of themes.
There's Steinsdóttir's personal life - she rapidly discovers she rather fancies one of the other cops, although there's still some family background that isn't quite clear, and she seems rather reluctant to sign the divorce papers that a miffed soon to be ex-husband is pressing on her.
There's the team she's joined, involving both a resentful colleague who clearly wants the interloper gone, a young and keen (but rather inept) officer and the various specialists who fly in and out and who, endearingly,  Steinsdóttir keeps forgetting the names of (I can relate). Overall, we get a vibrant and convincing portrayal of shifting team dynamics without any of the cliches of detective fiction - no unreasonable boss banging the door of his office, no washed-up wrecks of detectives who've given their all to the job and ruined their lives.
And, of course, there's the mystery itself - the horrific series of murders taking place (will it be possible to stop them, or will the police always be playing catch-up?) and, lurking somewhere behind, the historic crime - it's clear there has been one. Guðmundsson is very good at drawing out the connections between present and past. The damage that can be caused by things that happen to people at a vulnerable age leading to trauma and loss in later life. The more specific ways in which the past can shape the present. The unseen victims. In the frame for much of this is the Church, which it would be fair to say takes a bit of a kicking here. I know very little about the Church in Iceland but (I should declare my interest here as the husband of a Church of England priest) we all know the various historic scandals which have been exposed over the years around the world and so the web of cover-up, looking the other way and plain denial is all too credible.
All in all, The Commandments is a tautly-written (and crisply translated) crime novel with engaging characters and a fair bit of action that unflinchingly takes on a historical scandal. If at times it is a bit condemnatory, well, it's hard to complain about that.
Whether as a standalone or potentially the start of a series, this left me wanting more from Guðmundsson.
About the Author
One of the rising stars of Icelandic crime fiction, Óskar Guðmundsson has been writing since he was a youngster, but it wasn’t until a few years ago that his novel Hilma was published – and was an immediate success, winning the Drop of Blood award for the best Icelandic crime novel of 2015. This was followed by a sequel, Blood Angels, in 2018.
The first of his books to be published in an English translation, The Commandments is a standalone novel which appeared in Iceland in 2019. All of Óskar’s books have been bestsellers and rewarded with outstanding reviews. The TV rights to Hilma have been acquired by Sagafilm.
His latest book is The Dancer, which has been published simultaneously as an ebook, audiobook and paperback – accompanied by an original song in which Óskar’s words have been put to music featuring some of Iceland’s leading musicians.
Óskar’s talents don’t end there, as he’s also an artist and has held a number of exhibitions of his work.
"Óskar Guðmundsson is the kick-ass breath of fresh air that Icelandic crime fiction has been waiting for" - Yrsa Sigurðardóttir
About the Translator
Quentin Bates has roots in Iceland that go very deep. In addition to writing fiction of his own, he has translated into English books by Lilja Sigurðardóttir, Sólveig Pálsdóttir, Guðlaugur Arason, Einar Kárason, Ragnar Jónasson and others. He is one of the original founders of IcelandNoir crime fiction festival in Reykjavik.
For more information about The Commandments, see the publisher's website here - and also the stops on the blogtour, listed in the poster below.
The Commandments is available as an e-book here. 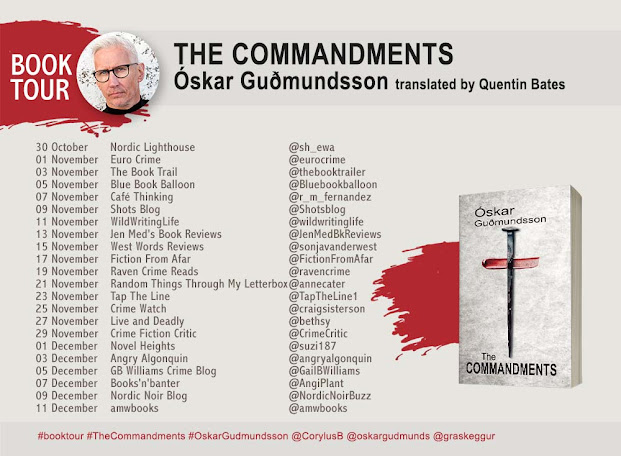