#Review - Velvet Was the Night by Silvia Moreno-Garcia

Velvet Was the Night
Silvia Moreno-Garcia
Jo Fletcher Books, 17 August 2021
Availablele as: HB, 281pp, e, audio
Source: Advance copy
ISBN(HB):  9781529417944
I'm grateful to the publisher for an advance copy of Velvet Was the Night to consider for review and for inviting me to take part in the Social Media Blast.
Silvia Moreno-Garcia is an awesomely talented and eclectic author. There is much more to he writing than her recent stand-out horror Mexican Gothic, in recent years she has has books published across multiple genres including SFF, romance, thriller, noir, and, yes, horror, often with crossover elements but always with action and heart.
In Moreno-Garcia's latest, Velvet Was the Night, we meet Maite, a young secretary in a Mexico City legal firm. Maite is something of a daydreamer and even perhaps what would now be called a geek - happiest retreating in the evenings to be with her books, records and comics. At 30, the patriarchal society around her (Maite's mother and sister included) are inclined to judge her as virtually an old maid, and Maite has bought into this to a degree, but I sensed that she gets far more fun and commitment from her own interests - and especially her favourite comic, "Secret Romance" - than she's had from any actual partner.
Also prominent here is Elvis, a tough who's part of a clandestine government militia used to break up demonstrations and target radicals. This is Mexico in the early 70s, a country haunted by the spectre of revolution, awash - or so the government believes - with Communist agents and sympathisers, and deeply penetrated by CIA operatives. Elvis has had a hard life and membership of the "Hawks" (who really existed, as Moreno-Garcia explains in her Afterword) has given him discipline, a purpose in life and, of course, a living.
The two figures circle round one another after Maite's neighbour Leonora, a well-to-do student affiliated with the radical scene, vanishes. There is a classic McGuffin in the form of a missing camera and film, which all sides want, and which might either be the spark for an uprising, evidence of oppression and torture, or a useful bargaining chip in the struggle between different arms of the security forces (of which there is a veritable alphabet soup). Maite is, at the start, wholly innocent of the deep waters she's getting into. She just wants paying for looking after Leonora's cat, so that she can get her car back from the mechanics and not have to travel to work on the bus, exposed to the attentions of gropers and worse. But in the best traditions of noir, innocence is no defence and if she wants to survive, Maite's going to have to wise up very quickly to the world she's in...
I loved this book, which - while being a wholly different story and set earlier, has thematic continuity with Moreno-Garcia's Untamed Shore, also featuring a young woman who becomes involved in murky goings on, and who ends up leaving her hometown for a more glamorous life in Mexico City. There is a similar examination of a woman's place in a male-dominated society, and a similar nuanced treatment which refuses to cast things in terms of victimhood: Maite is dissatisfied with her life and in particular her job, but she has carved out a space for herself in which she can live on her own terms. Like Viridiana in Untamed Shore, Maite is a quick learner and even more, a brave person who continues her investigation - as it has become - even when the warning signs begin to appear that she may be getting too deep. She's drawn, I think, at some level, to a potential adventure - her reading of sensationalist comics priming her to the potential for plots, conspiracies and Gothic revelations. Maite was already coping with her mundane office life by weaving a fictive world peopled by characters (boyfriends, enemies, allies) from her reading so it's perhaps not a big step to find herself in the kind of story they might inhabit.
Of course, this exposes Maite to real dangers that threaten the little world she has made, and which won't neatly resolve themselves in the last panel. Elvis (his codename, but which he prefers to his real name) is, he discovers, in something of a similar position with his best friend (his only friend) AWOL and his boss, the enigmatic El Mago, issuing increasingly frantic orders (such as to rough up a priest - which Elvis, though not at all religious, considers to be crossing a line). For both Maite and Elvis, reality and fiction seem to be crossing over and certainties dissolving. For both, it is perhaps a process of coming awake, even as life is getting darker and stranger.
The action here exposes that darkness - a period of Mexico's history when protesters were beaten and shot, opposition figures disappeared and factions within the ruling party struggled for primacy. It is a period that I know very little about and Moreno-Garcia's story shines a bit of light on it, while resisting stereotypes (Elvis and his crew are not, for example, bad men so much as poor ones doing a job) and allowing her characters room to breathe and to express themselves in the culture of the time, particularly its music (which plays a similar role here to that of cinema in Untamed Shore). Moreno-Garcia has included in the book her Spotify playlist for the book, which is well worth checking out.
I hope that in the description above I haven't made the book sound too doozy. It is, above all, a great read, atmospheric, exciting and soulful, bringing alive a particular place and time. Moreno-Garcia allows her characters to speak, more, she allows them to sing, and what a song this is. I'd strongly recommend.
You can find out more about Velvet Was the Night from the Jo Fletcher Books website here, which includes links to purchase, as well as from the other social media listed on the poster below. 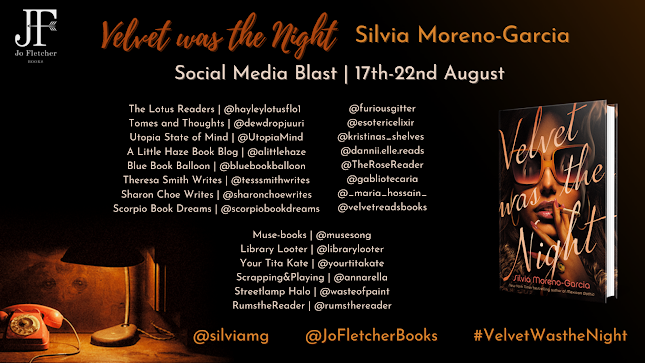