#Blogtour #Review - A Master of Djinn by P Djèlí Clark 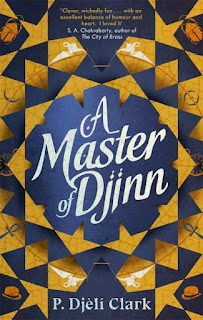 I'm grateful to Orbit for a free advance copy of A Master of Djinn to consider for review, and to Tracy Fenton of Compulsive Readers for inviting me onto the book's blogtour.

I found A Master of Djinn a very clever, very satisfying story on many levels. Taking us back to the fantastical Egypt of short stories A Dead Djinn in Cairo and The Haunting of Tram Car 015, A Master of Djinn is a full length novel set in a world where supernatural spirits mingle freely with humans. In Egypt, these are, naturally, the djinn whose tales feature so much Middle Eastern folklore. In other parts of the world they may be other entities - goblins, for example, in Germany. And in some places, they are not welcome at all: the United Kingdom, for example, which as a result has suffered reverses and is in danger of losing what remains of its Empire.

In Cairo, Fatma el-Sha’arawi is the youngest woman working for the Ministry of Alchemy, Enchantments and Supernatural Entities, charged with keeping a lid on the exuberance of the magical. Fatma is a glorious character, favouring sharp suits and never at a loss for a quip even in the face of the gravest danger. She's saved the universe before, and is the ideal person to call in to deal with the mass murder, apparently by magical means, of a secret society led by the reclusive British aristocrat and industrialist, Lord Worthington. Worthington's secret was dedicated to the retrieval of artefacts related to  Al-Jahiz, the mystic who, fifty years before, opened up a route to the spiritual dimension from which the djinn and other magical beings proceed. As a pretender to Al-Jahiz's legacy emerges, stirring up the Cairo mob and alleging collusion with foreign interests, it becomes imperative to solve the murder before Worthington's finds collection can be put to a sinister use...

P Djèlí Clark's ambitious story takes this intriguing premise and runs with it with great gusto, building on scraps of history, mythology and folktale to give us an immediately recognisable and believable world. There is Cairo the crossroads of East and West, where a dilettante aristocracy, obsessed with the past, may encounter more than he expects; a teeming world of djinn working in the city alongside humans, running bookshops, developing gambling habits, tricking marks with the old three wishes dodge; there are ancient Egyptian gods, holdovers from the past but still with some power; haughty angels who seem to have their own distinct plans; and much more.

He also gives us, in Fatma, an engaging and self-possessed protagonist, very much going her own way (especially when girlfriend Siri is on the scene) but not above misjudgements, as when she's teamed up with rookie Hadia - Fatma very much prefers to work alone and finds it hard to make the accommodations she needs to when mentoring a partner. I enjoyed the relationship between the two, which could have become clichéd but instead develops into something real, warm and alive.

Set against a background of the European powers drifting into war - the book features a peace conference brokered by Egypt and a walk on by nobody less than Kaiser Bill himself - the story is skilfully pitched to reflect on 20th century Great Power relationships and their colonial implications without being bound by them, rather it shows other paths that might be taken and leaves us to speculate how these might influence the future (including our future). It doesn't lack villains, whether megalomaniac humans or haughty djinn, and the fun isn't so much in the revelations of who they are (I spotted one fairly early on) as in how the ramified power politics between will unwind, what the effect will be on wider society - and who will die. All of that keeps the reader guessing, with plenty of twists and turns, perilous episodes and ingenious revelations. It is, basically, fun from start to finish and I hope to be able to read more in this world soon.

For more information about A Master of Djinn, see the Orbit website here and be sure to catch all the stops on the blog tour - listed on the poster below. You can buy A Master of Djinn from your local bookshop, or online from Bookshop dot com, from Hive Books, Blackwell's, Foyles, WH Smith, Waterstones or Amazon. 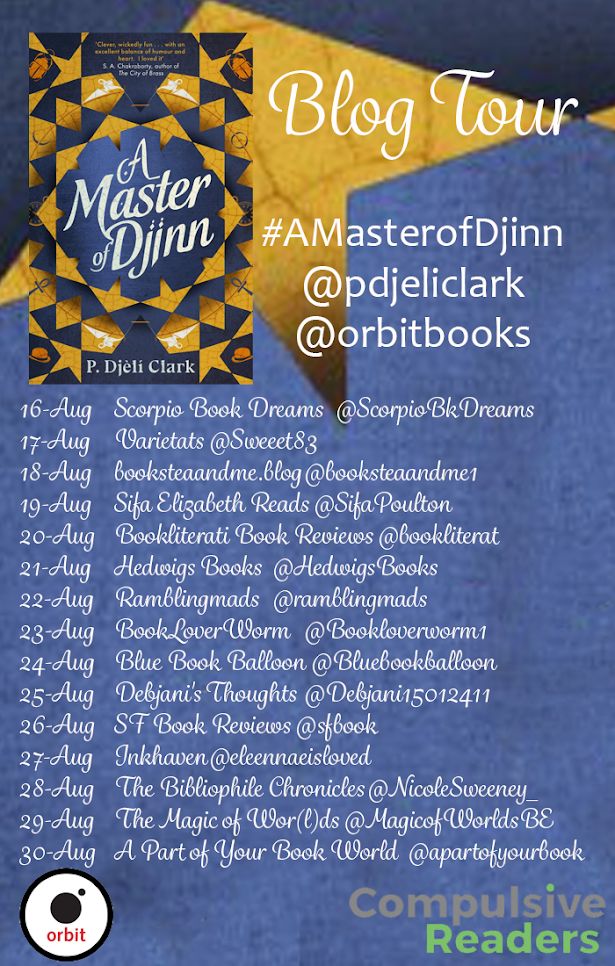