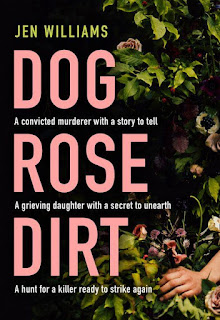 I'm grateful to HarperCollins for an advance e-copy of Dog Rose Dirt via NetGalley, so consider for review.
Well. This one really is something special. A kind of mash-up of crime, true crime and horror, it sees Heather Evans return to her childhood home to clear up her mother's house after mum killed herself.
Already estranged from her mother (who blamed her for her father's death), Heather is wracked by guilt even as she confronts a plethora of mysteries about her apparently boring mum.
Why has she been in correspondence for years with notorious serial killer ('Jack in the Green, the Red Wolf') Michael Reave?
Who is the woman called Lillian, who seems to know all about Heather's mum but who Heather has never previously heard of?
And what, precisely, is hiding in the shadows at the end of the garden?
Interweaving Heather's story with an older, darker tale and with instances of women being kidnapped, Williams has produced a seriously disturbing story that is almost an assault on any sense of ease or comfort, bringing an atmosphere of threat and, well, simply wrongness into what ought to be the brightest, cosiest moments. Is it, though, a new evil, a new threat, or is Heather simply discovering (or reawakening?) something old and persistent?
The answers seem to lie with Reave, but he will only speak in riddles, cryptic warnings and dark fairy stories. These are illustrated, a little, by passages describing his early life - these are eerie and haunting, but they take us to a hazy, remote world where blood, claw and sacrifice seem more real than teachers or Social Services. There is more than a hint of folk horror about this novel, although I think that it is not that, or not quite. What turns out to be the truth here is more about individual than communal wickedness, I'd say.
Heather is of course determined to find the truth, driven, I think, but some idea that it might set her free from guilt about her mother's (and father's) deaths. She is a complicated person with, as one might put it, anger management issues (she has her own secrets) as as she proceeds with her investigation different parts of her personality emerge and struggle with one another. She cultivates a relationship with the dishy DI Ben Parker, who's investigating a new spot of Reave-a-like killings, and we can see her desire for the company of an attractive and considerate man coiling round her interest in him as a source of information and also around a darker, more instinctive instinct that he represents protection from some sort of danger.
Heather is, in fact, a wonderful, three-dimensional character, from the mess she's made of her personal and professional life to her relations with her family to her delight at meeting up again with her childhood (and teenagehood) friend Nikki Appiah whose family have been more family to Heather than her own ever were (we eventually learn the reason for Heather's messed up family, in another dark thread that connects them to Reave). And as Williams has Heather explore her mother's past and present, she breathes life into a convincing landscape, whether she's describing slightly naughty teen antics in the suburbs or menacing goings-on in the woods. Part of the effect comes from the juxtaposition of mythological and fairytale elements with everyday menaces as when a young man in a pub harasses Heather: 'Got a face like a smacked arse on you, innit? Just saying, you'll feel better off you have a little smile.' But that is, of course, delivered by terrific writing which kept me hurrying through this story, intrigued at first by the mystery, gradually hooked into being concerned for the physical safety of various characters, then increasingly drawn into a worry over their moral fate, as it were, a concern that mounted and mounted into the explosive and frightening ending.
At no point does this story flag - taut and demanding, it's the perfect antidote to all those distractions that can get in the way of reading.
Only, don't, perhaps, read it in the dark on your own...
Email ThisBlogThis!Share to TwitterShare to FacebookShare to Pinterest
Labels: 2021, crime, horror, true crime, UK