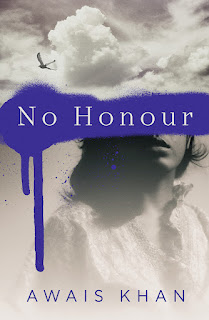 No Honour
Awais Khan
Orenda Books, 19 August 2021
Available as: PB, 289pp, e, audio
Source: Advance copy provided by the publisher
ISBN(PB): 9781913193782
Honour, Falstaff remarks in Shakespeare's Henry IV, Part 1, is 'a mere scutcheon', a symbolic device. It is, though, a device that can affect behaviour. It can drive people on, cause them to kill or make them be willing to be killed. And so we see here, in No Honour, Awais Khan's moving account of a life in contemporary Pakistan, which examines "honour" from all sides.
Abida is a young woman living in a remote village. Her mother is concerned that, at 16, she's still married, so her father Jamil, a poor butcher, makes overtures to the Pir, an influential and wealthy local figure with sons who need wives.  Money (which the family can't afford) is spent on a meal to entertain the Pir, who repays them by being rude, and his ghastly son is introduced. However, Abida has her own ideas and has secretly been meeting Kalim out in the fields. Naturally one thing leads to another and soon Abida is in a mess.
It's a story as old as time, but one where the stakes are especially high because of the culture and customs of the village. Another girl has recently been murdered in similar circumstances. This book isn't for the fainthearted, we see the villagers, driven by bloodlust, calling for the murder, with the Pir at the centre of things. It's a misogynistic culture, where, for example, the birth of girls is seen as a sign of weakness and male power in enforced ruthlessly (later, Abida encounters a mother whose daughters have, one by one, been murdered at birth).
So Abida's future looks bleak, and this book likely to be grim. But although dealing with brutal events, it contains a thread of hope. Forced to flee the village, Abida seeks to make a life for herself in the city of Lahore, a very different setting from the one she's used to. She has limited education (why would a girl need that?) and is disadvantaged by the society around her. Also, some of those she depends on are weak or selfish. Things become very difficult, and Abida ends up in a very desperate situation - she is treated vilely and her efforts to escape are punished brutally.
Abida remains, however, strong, resourceful and loving, determined to be free and to be with her family. And she has support from Jamil. Appearing at first scared of the Pir's power, he eventually leaves the village and sets out to find his daughter Lahore is as strange to him as it is to Abida, he has no friends or allies there but he, too, is strong and determined. This part of the book reminded me of Dickens at his most stark: a depiction of the teeming humanity in a throbbing, multi-faced city, a city full of perils and snares but also, friendships, acts of solidarity and, yes, love. The relationship between Jamil and Abida is at the centre - he is not a perfect man by any means, but he has a curiosity, and perhaps a streak of bloody-mindedness, as well as a family history, that prevents him from settling for "the way things have always been done" despite the obstacles around him - mainly those created by powerful, corrupt men. The propensity of such men to distort and debase society is laid bare here, making this as much an expose of patriarchal culture as it is a story of hope, love and redemption.
As I have said, there are many different conceptions of honour here; the desire to keep up appearances, to bolster a hierarchical and sexist order; an excuse used by bullies  to act out violent fantasies; or being true to one's family - wife, child, parent; following love; risking much for a loved one; heroic self-sacrifice to protect others; and many more. Is honour something bestowed by others, or does it arise from within? What acts preserve it, and what destroy it? Once lost, can it be regained? The truest expressions of it, as Khan shows, may be modest and hidden acts - charity for a man beaten by thieves; mercy and protection for a desperate young woman; not giving up when life becomes hard and there is no light in the darkness.
In all, No Honour was a terrific read. We see humanity at its best and worst, enduring love, appalling cruelty and stubborn faithfulness. Many times, as I read this, my heart was in my mouth. Many times, I didn''t want to turn the page for fear of what I might read. Every time, I had to continue with this compelling and convincing story. I hope you will, too.

I'm grateful to Karen at Orenda Books for an advance copy of No Honour to consider for review and to Anne at Random Things Tours for inviting me to take part in this blogtour.

For more in formation No Honour, see the Orenda Books website here or the other stops on the tour, listed on the poster below. You can buy No Honour from your local bookshop, or online from Bookshop UK, Hive Books, Blackwell's, Foyles, WH Smith, Waterstones or Amazon.