#Review - The Nameless Ones by John Connolly 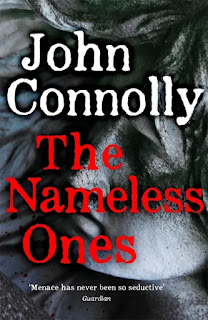 The Nameless Ones (Charlie Parker, 22)
John Connolly
Hodder & Stoughton, 8 July 2021
Available as: HB, 388pp, audio, e
Source: Audio subscription and purchased HB
ISBN(HB): 9781529398342
In some respects, The Nameless Ones doesn't need a review beyond "It's a new Charlie Parker by John Connolly!"
But I'm still going to write one because I want to explain - I want to try to understand myself - why this very dark book enthralled me so much.
First I should say that The Nameless Ones is focussed on Angel and Louis, Parker's friends (and hired muscle). Parker himself is only peripherally involved, but that's OK - for me Angel and Louis are always a highlight of any book they appear in and it was great so see them and to follow their loving, bickering relationship as they take a trip to Europe.
That's where the darkness comes in. Early on in the book there is a particularly gruesome multiple murder - Connolly spares us the graphic details - the victims of which include De Jaager, who we met in earlier books and who helped Parker, Angel and Louis. That proves his downfall, as it brought him up against a gang of Serbian war-criminals, people smugglers and gangsters who want revenge.
But two can play at that game. Louis and Angel set out to get revenge on the revengers.
What follows is a complex, cat and mouse chase across Europe. Much of the action focuses on Spiridon and Radovan Vuksan, the Serbian gangsters and war criminals who had been operating in the Netherlands but now wish to return home. There's a complicated, content-wide web of intrigue drawing in politicians who now wish to appear clean, a money-laundering lawyer, terrorists and various associates of the Vuksans who now just want a quiet life. The whole thing has the air of an exposé, drawing out the links between crime and exploitation and the apparently innocent to show how money talks, always and how blind eyes can be turned, for one reason or another, to the most egregious crimes.
Against this network, and against time as the Vuksans negotiate to return back to Serbia and safety, even Angel and Louis seem outmatched. And that's even before we detect a whiff of the uncanny in the Vuksans' camp. But as we know, it doesn't do to underestimate Angel and Louis.
I really enjoyed The Nameless Ones. It was a little different from previous Charlie Parker books I'd read in not being driven by the supernatural (although last year's The Dirty South was similar in that respect) but that doesn't mean the sense of suffocating, malevolent and active evil was lacking, oh no. Indeed, the Vuksans' capricious and apparently boundless capacity for harm almost appears graver for having no origin in any wider scheme or purpose than to gratify their own various lusts and troglodytic self-image. And of course it's clear that their actions are closely rooted in reality, making the picture drawn here darker still.
And yet that darkness doesn't make the book off-putting. Rather, the minutiae of Angel's and Louis' relationship, their acerbic comments on a grim world, coupled with Connolly's looping, interpretive narrative, makes every word a joy to read (or to listen to - I enjoyed the first three quarters of the book on audio, Jeff Harding's melodious voice catching all the nuances of the many characters here, but switched to the hardback because I needed to know NOW how things turned out). There was also time given to Jennifer, Parker's daughter, and her relationship with the living world, which slightly filled out - for me - the sense of a wider shared world and meant that Parker isn't, completely, left out of things.
Overall, then, this was more of a straight thriller than some of the recent books - but still not completely so, and WHAT A THRILLER.
I'd strongly recommend.
For more information about The Nameless Ones, see the publisher's website here.
Email ThisBlogThis!Share to TwitterShare to FacebookShare to Pinterest
Labels: 2021, Charlie Parker, horror, Thriller