#Review - a strange and brilliant light by Eli Lee 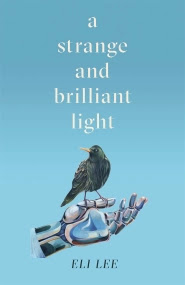 I'm grateful to the publisher for an advance copy of a strange and brilliant light to read and consider for review.

Sometimes, to see plainly, to understand just how strange things have becomes, you have to step back a bit.

That, I think, is what Eli Lee does in her riveting SF(ish) novel about the future of artificial intelligence (AI) and its effect on society - or perhaps, society's effect on society, because nothing is inevitable, it all depends what WE do.

The book is set in a recognisably modern world with laptops, the Internet, cars, trains, coaches - and poverty. Teenagers meet for parties in the sanddunes and do slightly naughty things. There are coffeeshops and trades unions, venture capital startups, conglomerates, and meditation retreats in the mountains.

But it is not OUR world. The geography, place names (Dhont, Mejira) and countries are clearly different, as is the history (which is alluded to but never explained - this book is very good at involving its readers without a great deal of exposition). There is no made-up language but Lee coolly uses comprehensible but not familiar English words such as 'unancestral' to hint at unseen depths, at concepts and structures shaping the visible narrative. Most tangibly, the different cultures we meet here have their own cuisines, with meals - both traditional and intercultural - described in, frankly, delicious detail. Overall, the effect is to distance the reader slightly from the locations and action, so that we question what is being shown and think about what is happening (and what we're taking for granted).

In Lee's imagined society, we are on the cusp of AI automating most of the work hitherto carried out by humans. The focus is on a chain of coffee shops, Slurpees, where "auts" are being introduced to replace human staff - early on we meet Lal, who is about to transfer from her job as manager of one such shop to a more senior position in the company, where she will be helping to plan future automation. This transformation is proceeding, at pace, without much thought being given by Government or there conglomerates to the consequences - that is, how people will make a living. Things are, I'd say, closer to the edge than in our world - but it's a matter of degree.

As the story moves on, Rose, one of Lal's team, takes on the managership. More concerned than Lal at what is happening, she attends protest meetings, falling in with the surprisingly uncharismatic Alek who leads the group but doesn't seem to regard the members as having much to contribute apart from their numbers. He might be a radical and agitator, but he's making the same mistake as the big corporations in discounting the input of actual humans, reducing even the activity of process to an assembly-line of placards. (Perhaps they could get auts in to do that, too?)

Alek knows what he thinks the solution is - something he calls 'source gain', what we'd describe as universal basic income, an entitlement for all to part of the fruits of automation, enabling a minimal, tolerable lifestyle. Rose seems less committed and more questioning of this concept - late in the book she lights on the idea of ownership, by the people, of the means of production (the auts). So, yes, there's Socialism in this alternate world - and indeed we get a good description of the alienation of the workers from their labour. But there are other ideas in the mix, too - wider elements in the protest movement are taking direct action, smashing the auts.

I thought that Rose's and Alek's protest meetings might be highlighting the dangers of an unstable society becoming more authoritarian, as they seem to occur clandestinely in a remote abandoned warehouse - but this is not really followed up and on the whole I don't think a strange and brilliant light is meant as a novel of political action. It's rather one where the wider forces in society are played out between a few characters and within their families. This comes across most strongly in the third central character, Janetta, who completes the picture by giving an insider's view on the progress of AI itself.

Janetta is a PhD student at a prestigious university (contrasted with the local college which was all Rose could afford to attend, despite having higher aspirations) worked on making AI empathetic, considered a key step to developing conscious artificial intelligence. She's also going through emotional turmoil, having split up with her girlfriend. Lee has a twist of fate link Janetta up with the founder of one of the top AI start-ups, so allowing a dialogue between Janetta's approach to the AI problem, informed by her loss of Malin, and Taly's more functional attitude.

The relationships between the three women, their wider families and the workplace, played out over job changes (a particular grim description of Lal's arrival at a dream corporate campus, the antithesis of all her hopes and dreams), holidays and meet-ups, creates a fascinating tapestry of life which, yes, serves to illustrate the dilemmas and risks of the new technology but at the same time is simply riveting to follow. The process of automation is marked by the progressive elimination of people from Slurpees, while Lal's supposedly favoured management position becomes more and more dehumanising and Janetta finds her progress frustrated by relationship entanglements and doubts over the ethics of what it's doing.

In what is actually quite a short book, Lee gives the reader a massive amount to ponder as well as delivering a brilliantly written and absorbing story about some very real people.

I would unreservedly recommend a strange and brilliant light.

For more information about a strange and brilliant light, see this blogpost by the author, explaining the inspiration behind the book and the publisher's website here.