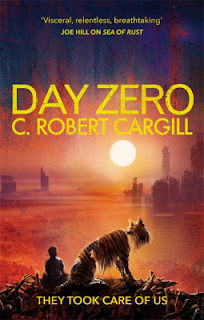 Day Zero
C Robert Cargill
Gollancz, 20 May 2021
Available as: PB, 304pp, e, audio
Source: Advance e-copy via NetGalley
ISBN(PB): 9781473212817
I'm grateful to the publisher for an advance e-copy of Day Zero via Netgalley to consider for review.
Spoiler alert - this book is a prequel and my review assumes you have read the earlier book.
Day Zero is a prequel to Cargill's Sea of Rust, published in 2017, which was set 30 years after a robot uprising - and 15 years after the death of the last human. Day Zero takes us back to the eve of the apocalypse, focussing on a suburban US family comprising mother Sylvia, father Bradley and child Ezra.  The latter is cared for by Pounce - Nanny Pounce - a robot designed to resemble a tiger.
I recognised the background to the uprising from Sea of Rust - controversy over freed robots establishing their own town, the fury of rednecks and pretend Christians, and eventual conflict. While it's set, perhaps, 100 years in our future, the topical references are here and have only sharpened since 2017: the violent hooligans are referred to as "red hats", and there is the same parallel drawn between the condition of the robots and that of enslaved people as was present in the earlier book but I think was much less immediate because that was set further in the future and the humans were done with.
The parallel is I think particularly apposite here because we see liberal Bradley and, especially, Sylvia, in the full pomp of their hypocrisy. They are following events from the inauguration of Isaactown (the robots' city) cheering on the free robots and deprecating the red hats - while still owning and commanding Pounce and household robot Ariadne, and making no bones about what ownership means - Pounce's box is still stored away, waiting for the day when Ezra no longer needs him. I would liked to have seen this tension explored further, but Cargill cuts it short and takes a very different turn with the plot once things get violent, giving us instead almost continual action through the final two thirds of the book as Pounce seeks to defend Ezra from bloodstained, insurrectionary bots.
While that part of the book has its own philosophical angle to which the fast paced narrative occasionally returns - is Pounce doing this from real choice or because of programming? - it is more nodded to and not explored in much depth, certainly not the same depth as the question, in Sea of Rust, about the sense of responsibility and even guilt felt by the robot protagonists and their dilemma about joining a super AI collective (again, hinted at here but not central).
Instead, we essentially get a series of combats, escapes and duels involving Pounce and his eight year old charge as they seek some kind of safety amidst a world gone to pieces. That is all very well done, and it's definitely a compelling read, even if you hold in the back of your head the fact that by the time of Sea of Rust, all the humans were dead, which seems to make whatever happens here moot. There is though  lots of tension and peril, and the immediate task of survival allows for plenty of drama.
It didn't though, for me, carry quite the ethical heft of Sea of Rust, and its nature as a prequel, leading to a known state, rather took the emotional heft out as well. Great fun to read, and I would certainly look at another book set in this world, but I think it could have been a lot more.
For more information about Day Zero see the publisher's website here.

Email ThisBlogThis!Share to TwitterShare to FacebookShare to Pinterest
Labels: 2021, apocalyptic, near future, Robots, sea of rust