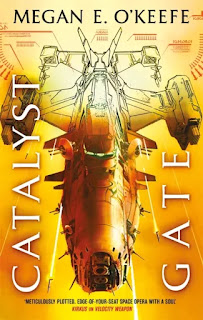 I'm grateful to the publisher for an advance e-copy of Catalyst gate, via #NetGalley.

Catalyst Gate is the third book in The Protectorate trilogy (after Velocity Weapon and Chaos Vector). The Protectorate is absolutely the kind of trilogy you need to read in order and if you haven't read the others, and you want to understand whether to read the trilogy, you need to go back to my earlier reviews and not read on here because spoilers. (Hint: you should read the trilogy).

If you've been following The Protectorate you will almost certainly want to read the third part, so part of me wonders what I'm actually doing in this review. I often have this with trilogies, and my answer is basically (1) How well is the author closing off her sequence - does this book stand comparison well with the others? (2) How good is the trilogy overall?

Taking these questions in order, my answer to the first would be, VERY WELL. There are a lot of moving parts in The Protectorate. The story follows Sanda, a commander of the Fleet who's been through all kinds of weird stuff; experimented on by a hostile power; deceived by the first incarnation of the AI known as Bero into believing that her world has been smashed and that she has been marooned in deep space for decades; romanced by plausible rogue, spy-for-hire and, potentially, artificial lifeform, Tomas; framed for an assassination and hunted by her own side; and much more besides. It follows Sanda's brother Biran, a rising politician and Keeper in The Protectorate, who has discovered that its history and politics and a lot less pure that he believed. There was also the group of gutter rats who, for most of the first two books, were coping with the consequences of their disastrous heist-gone-wrong, as a result of which their leader Jules has become the loosest of loose cannons, allying with the alien entity known as Rainer.

In this third book O'Keefe deftly takes forward all these main protagonists (and more). She still has plenty to say about them all - we aren't just going through the motions - even as Rainier's endgame approaches. There are further surprises, and a series of calculated risks taken by all involved. Things kick off very quickly at the beginning of the book - there is no lengthy recap, but O'Keefe still manages to keep the reader in the frame about backstory and motivations so that the story develops organically and everyone feels "real". Yes, there were a few (a very few) exceptions, when I asked myself "why did he/ she do that?" but I feel that is inevitable in any sequence of this length.

As well as the characters, we are still learning more about this universe and its history. This is far-future SF, following humanity long after it has left Earth, and it turns out there are secrets to be told about that whole history. Topically they're bound up with the originals of "Prime Inventive", which I had always seen as a society but which is actually the descendant of a private company - the one which happened to win out in the contest to explore space. Firmly believing that nothing good can come from over-mighty corporations, I wasn't surprised to learn there'd been dirty work at the crossroads and that it involved the alien tech whose origin and purpose has been a prominent theme through this trilogy. And yes, we finally discover more about that too.

I am, I think, moving on to my question (2) above and my answer is that while each part of this trilogy has been very good indeed, the whole has a kind of commonality and progression which makes it more than the sum of the three parts. Seen together, these books present questions - and warnings - about our stewardship not only of this planet but of the wider Universe, about loyalty, the nature of humanity and the corruptions of politics. In some ways the most human characters we meet here are composed of bits and bytes or of naneites; or are unregarded outsiders or junior players. The gilded priesthood of the Keepers shows a tendency to guile and self-interest rather than the common good, making it ten times harder to deal with the threat of Rainier and that's not an aberration but totally in keeping with the history and politics of Prime. In contrast, Sanda and her Fleeties, the rogues and criminals of the Grotta, Bero and Tomas, have a sense of humility and fragility that fires their suffering into strength and integrity. As O'Keefe writes of Sanda, 'Those pressures collided against the woman... compressed her, made her as hard and immovable as the deep ice...'

O'Keefe integrates these themes and makes her three novels into a single, coherent whole, no easy task in such a vast story, creating an absorbing and convincing world with compelling characters whose stories are told with humour and grit. I'd unreservedly recommend the sequence, if you've been waiting to see how it would turn out, and Catalyst Gate as its culmination.