#Review - For the Wolf by Hannah Whitten 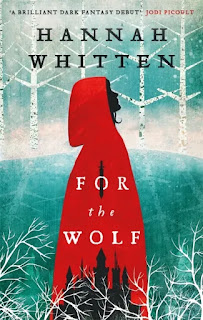 For the Wolf
Hannah Whitten
Orbit, 3 June 2021
Available as: PB, 430pp, e, audio
Source: Advance PB copy
ISBN(PB): 9780356516363
I'm grateful to Nazia at Orbit for an advance copy of For the Wolf to consider for review.
You know how the old story goes.
Girl meets cursèd magic wildwood.
Girl loses cursèd magic wildwood.
Girl finds cursèd magic wildwood again.
Well sometimes, it isn't actually that simple...
Red is the Second Daughter, the First being her sister Neve. In their fairy-tale(ish) kingdom of Valleyda, the First Daughter takes the Throne, the Second (if there is one) is sent into the Wilderwood, to the Wolf. What exactly happens then, nobody knows, and it's a while since a Daughter was sent to the Wood, but the Second Daughters don't come back alive, that's for sure. Yet the custom continues, and Red has grown up knowing what would happen. Her mother, clearly, never let herself love Red, as she would one day lose her, and Red was never considered worth an eduction (what would the point be?).
As the story opens, it's a couple of days before Red goes to the Wood, and this background rankles with everyone. The tension fairly crackles off the page as everyone tries to avoid what must happen, or to reconcile themselves to it, or to try and ignore it. Neve tries to persuade Red to run away: never mind that her sacrifice is supposed to prevent the Wolf unleashing demons on the Kingdom! But Red won't listen - she has her reasons for wanting to place distance between her and her family - and so the story begins.
It's told in two threads, what happens to Red in the Wood (the main story) and glimpses of what's going on back at home. That's actually quite a significant part of the story, and I think Whitten deserves credit for the brave decision to tell it in vignettes, relying on the atmosphere established in those early pages, and the reader's intelligence and empathy, to fill in the blanks. A brave decision, but I think the right one, because it means we are able to follow Red much more closely in the Wood and her story (which is really compelling) isn't frustrated by lengthy interruptions from another point of view. That's important, because what Red finds challenges everything she has been told about the Wood - and she's also flung into a complex personal situation.
It seems that Valleyda, dependent on income from pilgrims because of the Second Daughter thing, might not, exactly, have told the truth about what's going on. Or perhaps doesn't know the truth (leaving scope for those who do to manipulate things, of course). At any rate, there is a hidden battle going on in the forest, one involving the Wolf, who turns out to be real, but a much more ambiguous figure than Red might have expected - as is her role in the whole thing. It's possible even the Wolf doesn't completely understand that, and to complicate things, Red is drawn to the Wolf - embodiment that he is of the dangerous powers of the Wood, powers that are certainly not friendly to Red.
This is an appropriately tangled story, its undergrowth beset with dangers and potential dangers should anybody put a foot wrong, and the theme of sacrifice is never far away. Red is a young woman, still not fully sure of her desires, her powers or her destiny, and she's been brought up to believe she faces a terrible but certain fate. Even after her family have abandoned her to that fate, she still feels a weight of responsibility for the Kingdom: and she learns that its defences are failing. Whitten leads us to understand the true situation by very slow degrees, subtly deepening Red's own involvement with and commitment to the powers of the Wood as she does so, and its changing, darkening nature as the story unfolds creates an ever heightening sense of threat and evil. Albeit the Wood is not kind, it seems awful that the trees are rotting, and then vanishing - Whitten's imagery adding a feeling of environmental catastrophe to her supernatural theme.
I wasn't surprised, in the end, when the reasons for the danger were made clearer - there is a rather obvious villain in this book, in plain sight - but I was impressed at how credible that person's motivation was and how they were able to influence and manipulate others. That may ultimately be the theme of this book, how good intentions and even love can be tainted by darker desires and so open to corruption.
Overall, a dark cocktail of love, duty and rebellion, but these elements are so skilfully blended that these seemingly familiar themes end up delivering a real kick. Can't wait for the next book, For the Throne.
For more information about For the Wolf, see the publisher's website here.