#Review - What Abigail Did That Summer by Ben Aaronovitch 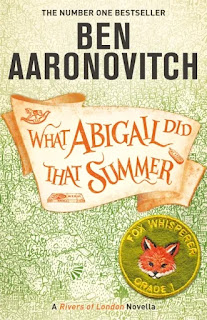 What Abigail Did That Summer
Ben Aaronovitch
Gollancz, 18 March 2021
Available as: HB, 208pp, e, audio
Source: e-copy and HB
ISBN(HB): 9781473224346
Fitting into the Rivers of London chronology in parallel with Foxglove Summer, which took Peter Grant out of London to support Herefordshire Police with a supernatural case (or "weird b******s" as it's described by his mundane colleagues), What Abigail Did That Summer tells us what was happening on Hampstead Heath and particularly, what part his young cousin, Abigail Kamara, played in it.
Abigail, you may recall, wants to learn magic (this book explains why she she is so keen - I can see trouble down the line there) and is therefore studying Latin. She has featured before in both the Rivers books and comics, which have stressed her affinity for the talking foxes who live on the Heath. Here we learn more about them (mainly, what a puzzle they - I can see trouble down the line there, too).
It's summer, Abigail is out of school and a bit bored, with time on her hands. She's also observant (partly through Peter's influence, perhaps, although I suspect mainly not), extremely bright and, of course, aware of the magical world. If anyone is going to spot the magical background to the disappearances (and reappearances) of kids on the Heath, it's going to be her. And of course she's going to want to investigate...
What follows is, I'd say, one of the lighter of the Rivers books. Like them, we learn a lot about a particular part of the city - this time, the Heath - and its relation to the Rivers. Like them, the protagonist   is thoroughly at home on her own turf (or as Abigail calls it, her "ends" - the book is peppered with London youth slang - 'Simon's mum is Fed-adjacent in some way' which is helpfully footnoted where needed). Both Peter and Abigail are Londoners born and bred, in turn with the sounds and smells of the city and aware at once when something is a bit... off. ('You don't grow up small, mouthy and mixed race in North London without picking up a few tricks'). Whether you call that magic or not, it always gives them a head start in getting to the bottom of things. In tune with that, Aaronovitch is always at his best when describing the physical or the social geography of London: how the house prices one side of a street are higher than this on the other, the particular whiteness of a given social setting, where a river was paved over to make streets, the history of the bathing ponds on Hampstead Heath. Not only describing, but building his story on it.
So when Abigail stumbles into a perfect 1970s dinner party out of time (yes, an Abigail's party, what else?) the setting is perfect not only down to contemporary events - the 3 day week, the miners, Vietnam - but to the minutiae of social strata that the past layers on the present. (Or is it the other way round?) Just as he is with the interaction between lower class, mixed race Abigail and strikingly wealthy (for a supposedly mid ranking civil servant, she's a Grade 7 for goodness sake) Simon's mum, mentioned earlier. (I don't think she would be able to afford that house, there's something that is, as Abigail might say, definitely dodge there).
All of this is really me trying to say that the world Aaronovitch creates here is so rich, so well done, that you're almost at risk of getting distracted form the plot, so please do pay attention, because - while I'm obviously not going to say a great deal about what happens: spoilers! - it is a clever and twisted thing that has Abigail running in circles and having to bargain, bribe and promise here way through London's demi-monde (as it's called here: a magical substrate to the city, not a society of artists and courtesans). I think some of those deals and exchanges she makes may, also, be storing up trouble ahead...
In all, another EXCELLENT contribution to this series and a book I basically consumed at one sitting - because why stop when the writing's as good as 'I use a fountain pen because it's like writing on money' or 'an ornamental knocker that looks like it should have the face of a dead banker but doesn't'? Or when Aaronovitch is riffing off Douglas Adams ('it's radiating happiness in exactly the way a clown doesn't') or doing bitter humour ('Nobody ever accused me of being good at happy')?
No, there's no sense in stopping for a moment, or delaying reading this. I should aapologise to the book I was meant to be reading when What Abigail Did That Summer came along, mugged me for my attention, and loudly monopolised my reading time. But, do you know - I'm not sorry AT ALL.
For more information about What Abigail Did That Summer see the publisher's website here.
Email ThisBlogThis!Share to TwitterShare to FacebookShare to Pinterest
Labels: 2021, Fantasy, London, Novella, Rivers of London