#BlogTour #Review - The Fall of Koli by M R Carey

I'm grateful to Orbit for a free advance copy of The Fall of Koli and to Tracy for inviting to take part in the blog tour.

The Fall of Koli is the final part of the Rampart Trilogy and - as Koli, narrating the start of the first book, told us it would - brings things full circle, with the return of an older and wiser man to Mythen Rood. We finally learn more about certain recurrent themes - the demon Stannabanna, and Dandrake who fought him; The Sword of Albion, which Koli, Ursula, Cup and Monono were searching for, and the Unfinished War (well named). It's also made clear how the story came to be narrated, by Koli (in all of the first book), by Koli and Spinner (in the second book) and here, by both, plus a third person - who turns out to have had a hand in certain earlier events which are now visible form a new perspective.

It's a satisfying and well rounded conclusion with a tense and dramatic ending, but I do advise you to read the previous two books first (and to stop reading my review now because it'll both confuse you and spoil the story!)

The Fall of Koli picks up exactly where The Trials of Koli ended, with the company desperately trying to get aboard the mega ship, The Sword of Albion, with their precious "diagnostic", rescued from the ruins of Ursula's drudge. They succeed, but this only brings them into a very strange world indeed. There are three people on the giant ship - Paul, Lorraine and their son, Stanley. There is something odd about Paul and Lorraine, Carey's portrayal deftly painting their strangeness which only morphs and becomes more complex as Koli (mainly) strips away layers of deceit. Who they are, what they were and what their purpose is prove to be deeply tangled matters and the more Koli understands, the more danger he and his friends prove to be in.

While this part of the story proceeds, Carey cuts away from time to time to follow Spinner, back in Mythen Rood. Spinner's story in The Trials of Koli was for me one of the best  parts of that book, giving. whole new perspective on events in The Book of Koli and also presenting in Spinner a fascinating, clever and resourceful woman who is pushed into a difficult corner but determined to survive and to protect her family and village. That continues here, with Spinner becoming something very close to the leader of Mythen Rood. That requires joining in the deceptions the Ramparts pull on everybody else and Spinner recognises the moral ambiguity of that. She's determined to end the system, but has to play a complex game of politics to retain her position and address the growing threat of the Peacemaker, who lays claim to all and any "tech" in "Ingland". Basically, Spinner is forced to go to war, and it's a desperate conflict.

It's difficult for me to convey just how engaging, convincing and entertaining The Fall of Koli (and the trilogy of a whole) is. The reader has, of course, an advantage over Koli and his friends (except perhaps for Ursula) in recognising many places, events and things and even more so now that Koli has landed in something closer to our world. So there's that sense of recognising something and then seeing how Koli will cope, what it will mean to him and how he will make sense of it. But there are also many moments when Koli's world is baffling and it's his experience an intuition that guide us through it and help us make sense of things. That process is, as I've said, supplemented in this book by another, third point of view - in fact, by a fourth, kind of, as Koli finds a new and different resource to guide him but one that may put him in desperate peril.

Even in this third book, Carey is exploring new themes and elaborating existing ones. When the reasons for the Unfinished War become clear, you may want to think about them in relation to where we are in this country now. Ursula's repugnance for an independent Monono is explained at last, and the presence of humanity alongside that hostile Nature ("Everything that lives hates us...") is revisited but from the perspective of what balance we might be able to find with it. It's an ideas-rich book with the vastly different perspectives of the main characters - the trans girl Cup, educated doctor Ursula, virtual Monono who is in some ways the oldest of the group, and Koli himself - constantly sparking off one another and suggesting new and unexpected truths and conclusions.

That goes on to the - rather unexpected - end, with the final passage a musing on identity and reality from a character you might not expect. It's a neat pairing with the opening words of the trilogy, and satisfying place to conclude.

I would strongly recommend The Fall of Koli, and this trilogy as a whole. Reading the books has been a real treat one of my highlights of 2020 and 2021.

You can find out more about The Fall of Koli at the other stops on the blogtour (see the poster below) or from the publisher's website here. And you can buy it from your local bookshop, or online from Bookshop, Hive Books, Blackwell's, Foyles, WH Smith, Waterstones or Amazon. 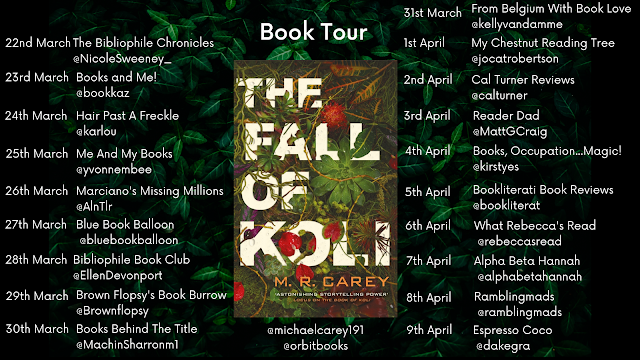