#Review - The Cut by Chris Brookmyre 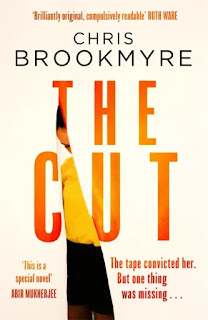 The Cut
Chris Brookmyre
Little, Brown, 4 March 2021
Available as: HB, 416pp, e, audio
Source: Advance e-copy
ISBN: 9781408712153
I'm grateful to the publisher for an advance e-copy of The Cut via NetGalley.
'Truth is, you never really get away with anything. You're always living with the consequences.'
The Cut is, like Brookmyre's last novel, Fallen Angel, a standalone crime novel although set in the same reality as his other books (I spotted clues!)
Its two main characters, Millicent (Millie) and Jerome (Jerry) couldn't seem more different. Millie is - or was - a make up artist, brilliant at creating gory deaths in the low-budget horror films of the 1980s and 1990s. But she's been away now for more than twenty years, and is, in her 70s, getting to grips with the 21st century and her different place in it.
Jerry, a young man of colour, was brought up by his gran in a little Ayreshire town, subject to bullying and prejudice (and sometimes running with the wrong crowd). As at home in the 20s as Millie feels out of time, he's started on a film and politics course in Glasgow, but getting into some hot water in the halls or residence, gratefully takes up the offer of a place in the tenement flat Millie shares with two other women.
What seems initially to be a classic comedy of opposites forced to rub along soon, however, takes a much bleaker tone. Jerry has secrets, and Millie has darker ones. Both reach out from their pasts to threaten, and they will need to pool their talents if they're to survive.
I loved the interplay between Millie and Jerry. Millie is almost in shock, mistrustful and ill at ease and indeed (little bit of a CW) early on she's verging on suicidal. Basically her life and reputation were destroyed 20 years earlier. She's been in an environment where trust is next to impossible, and there is a palpable sense that she's just waiting for the hammer to fall and her hard-won, fledgling place in the modern world to be snatched away. And if she's bound to fail, wouldn't it be better to pull the lever herself? Jerry has a similar dilemma. Uni isn't really for people like him, is it? Surrounded by (apparently) self confident, posh English types ('Born three-nothing up and convinced they'd scored a hat trick'), he is acutely uncomfortable, and possessed of a similar, self-destructive drive to jump first, before he's found out.
Not the most promising pair to deal with the consequences when Millie spots, by chance, a photograph which casts a new light on the catastrophe that destroyed her life. But following up that information has brought those consequences down on them, and they have no choice. The way they go about this, come to rely on one another, and find out just how much they have in common was a joy. Interspersed with that story is an earlier timeline, following Millie at her work on a gore-fest in the later 80s (a film which later came to be regarded as cursed, 'so horrifying that it didn't even get as far as being banned'). She was at the top of her game, and I loved Brookmyre's depiction not only of the somewhat louche goings on around the film ('it's not a real party until an ambulance turns up') but of the thrill of the business itself - the making-water-flow-uphill sense of actually pulling off a production, keeping the backers on side, dangling promises of tax breaks and of stardust, of being touched with the glamour of the movie business. (Alongside this we also see the tedium of long hours on set, everyone waiting while a shot is set up, with money burning all the time).
Featuring numerous escapades, capers and near escapes, the story basically pits Millie and Jerry as (apparent) innocents against some very shadowy and avowedly professional (and rather scary) figures from that dark corner where politics, the media, organised crime and the spooks hang out together. You wouldn't put money on our heroes surviving, but this is the movie business and both may be able to call on some unexpected resources.
As ever, Brookmyre's writing is spot on, from the entitled English students in Jerry's class ('respectable middle-class kiddies from Melton Middle and Crumpetshire') to the great unmentionable ('it's awkward when there's a Brexity relative around for Christmas dinner' - and indeed the book is a glorious romp through a very Continental film culture) to the fallout of the Leveson enquiry after which Brookmyre's clearly ENTIRELY FICTIONAL press and media baron, who seemed very shaky when giving evidence '...made a ****ing miraculous recovery though, didn't he?' There's foreshadowing, in the comparison of a Parisian hotel to the Continental from the John Wick movies, and in a certain escapade with a wheelchair. There are film references galore as Jerry and Millie try to score points off each other. (Jerry's gran ran a video rental store back in the day, when there were such things: he grew up on "video nasties" and one target of Brookmyre's scorn is the hypocritical campaign against them - 'it was always the same when there was a cultural phenomenon of which the British establishment disapproved').
And when all the secrets are revealed, and the events that set everything in motion are finally revealed, the book proves, indeed, to a have a very contemporary resonance. What had been hidden all along would have seemed very different if it had come to light earlier, making this a book truly of its (two) time(s). Brookmyre balances a thrilling and high-jeopardy series of events with a real satirical edge and a dash of truly ghoulish humour.
For more about The Cut, see the publisher's website here.
Email ThisBlogThis!Share to TwitterShare to FacebookShare to Pinterest
Labels: 2021, crime, films, Scotland, Thriller