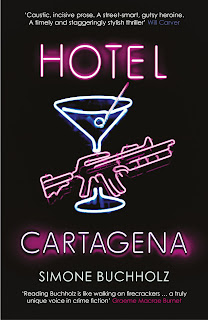 I'm honoured to be taking part in the blog tour for Hotel Cartagena, and grateful to Orenda Books and to Anne at Random Things Tours for providing a copy of the book and inviting me to take part.

Well, this one is certainly something different!

I've been following the Chastity Riley stories from the beginning and thought I knew what to expect, but in this fourth episode Buchholz  shakes things up somewhat. In fact she throws all the rules out of the window - the window being that of a 20th storey hotel bar above the Hamburg docks. That's where Riley has come with her collection of damaged friends and colleagues to celebrate Faller's birthday. Yes, it's an office party (of sorts) for Hamburg's CID and their hangers on, and as you will expect if you think about that for a moment, it turns out not to be an ordinary party AT ALL.

The gang's all here - introduced one by one: Faller, Brückner, Calabretta, Klatsche, Carla, Rocco, Stanislawski, Riley herself of course - with their placing carefully spelled out. Even before anything else happens, Riley notes the tensions and suggests that 'we have a situation'.

And then, hostage takers storm the bar...

This is therefore in many respects a very different book from the previous ones in the series, which all follow the patten of a criminal investigation - but also, very similar, in that the same people are present (except for one), the atmosphere - a kind of exhausted noir - is the same, and the ultimate motivation for what happens is rooted in the same criminal underworld.

We get the familiar punchy, irony-laden chapters narrating both events in the bar (from Riley's point of view - 'I'm just the rather confusing type of woman') and, going back several decades, the life of a man - Henning, later Henk - who is intimately related to what happens. His is a compelling life history, even though told in miniature (this is a short book and Henning is only part of it). Buchholz gives us, in a relatively small space, a deep feeling for this man who, on a whim, hopped on a ship and worked his passage to South America (you can still do that?), found a home, fell in love... and suffered unimaginably.

It's also a heist, because what happened to Henk underlies a complex, carefully planned operation in the attack on the hotel bar. We see this unfold, and some of the planning and preparation, at the same time as the police response and the dramatic endgame. One of the crew is missing from the bar: Stepanovic got distracted by a pretty face on his way to the party, so ends up shivering in a tent in the street, playing at being a hostage negotiator (it gives him an in, at least). Personal life and police work come into conflict as the various men with whom Riley is, or has been, involved (again, 'I'm just the rather confusing type of woman') endure the waiting, trying to work some angle with kidnappers or authorities).

And all the time, the clock is ticking.

We've seen all these characters before, generally in Carla and Rocco's bar. They are free spirits who have come and gone through the pages of Buchholz's stories. Now she has, rather cruelly, constrained them. It's almost a laboratory experiment, a test of how all the distinct personalities we've come to know and, yes I'll say it, love, will change under extreme conditions.

But Hotel Cartagena is much more than that. As I've said, Henning/ Henk's story is compelling and his development as a person is riveting and all to credible. The previous books sketched the Hamburg underworld for us as a pretty dark, dangerous place but Hotel Cartagena makes it seem like a kindergarten, compared with the more elementary, more ruthless world that Henk stumbles into.

As ever, Rachel Ward's translation here is sharp, lucid and colloquial. Some chapters verge on poetry, rendered in terse, rapt lines. In other places we get dreadful puns ('The Wurst is yet to Come' - literally true for one character). Always, the deadpan tone of Riley's internal monologue, the dry wonder at how bad things can get, is maintained, the effect building through the book until a final, unexpected climax that knocked me right off balance.

There's a change of pace, a rising of the stakes, in Hotel Cartagena, compared with its predecessors which makes it - and I would have thought this next to impossible - even better than they were, even tenser, even darker. At the same time I think there is also a sense that under the pressure, some block in Riley, something which has trapped her in her familiar sardonic circles, has shifted and she may be on the move. To what effect, we'll have to wait and see in future books - which I'm now very impatient for!

If you haven't been reading this series (in which case I envy you about to discover it all for the first time!) Hotel Cartagena would be a good place to begin, giving a taste of the mood and tone - and the characters - without being spoilery about earlier events.

For more information about Hotel Cartagena, see the Orenda Books website here - and the marvellous blog tour entries on the poster below.

You can buy Hotel Cartagena online from UK Bookshop dot org, from Hive Books, Blackwell's, Foyles, WH Smith, Waterstones or Amazon. And also of course from your local bookshop if they are doing click-and-collect, as many are. (For my local shop it's more of a "David-sends-email-and-collect" and if I'm lucky they have the book in anyway so actually much quicker...) 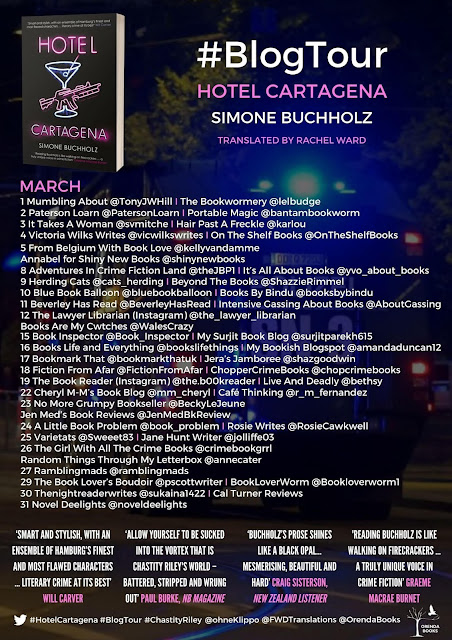