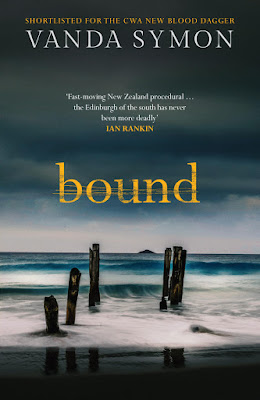 Bound (Sam Shephard, 4)
Vanda Symon
Orenda Books, 4 March 2021
Available as: PB, 265pp
Source: Free advance copy from Orenda Books
ISBN (PB): 9781913193522
I'm grateful to Orenda Books for an advance copy of Bound to consider for review and to Anne Cater of Random Things Tours for inviting me to take part in the tour.
Four books into this series, Symon's irrepressible detective, Sam Shephard, has yet another nasty murder to unpick as well as a series of personal and professional dilemmas. Her father is dying of cancer and she's wondering where to take her relationship with Paul (now one of the team - breaking Sam's unwritten rule about the thing you don't do with the "crew"). And DI Johns - aka The Boos - is as much of a sexist pain in the backside as ever.
I felt Sam was a bit more subdued in this one. Maybe it's the subject matter - her dad's illness is hitting her hard - or maybe it's that she is learning her limits (I do hope not!) but she doesn't get into quite so much trouble with Johns here. Even though, after being instrumental in solving the murder, she takes another look and begins unpicking the case again, potentially exonerating two known gangsters who are believed to have killed a police officer...
The book opens with the wife of a prominent Dunedin businessman gagged and tied to a chair in her own sitting room, gazing at his bloodstained body and waiting for her son to come home and release her. ('You vomit, you die'). It falls to Shephard and her team to unpick John Henderson's life and business, identify some dodgy connections and zoom in on those who might want him dead. The investigation allows Symon to sketch a whole web of shady Internet pharma dealing, which dovetails with drug dealing and organised crime. Sam even gets a trip away to Auckland (portrayed here very much as a place you don't want to go) to chase down some leads (literally).
The picture is complicated by the fact that the two prime suspects - who have gone to ground - are suspected of being involved in the earlier killing of a police officer, and the injury to Sam's friend Smithy that has left him morose and hurting. He's definitely not a neutral party here, so when allegations are made of a police fit-up, Sam's in rather an awkward position.
I really enjoyed Bound. Its opening is deceptive, appearing very much a conventional police procedural with a relatively straightforward case and with Sam rather on the periphery of events, sent to do the boring little jobs that nobody else wants while the big boys duo the real work (grrr, I really hate DO Johns!) But Symon twists things, and the book suddenly seems to be going to quite unexpected places (although if you go back, the clues are there).
That's true not only of the case but of Sam's private life and her future with Paul. (I'm not sure I completely welcomed developments there: don't think I really approve of him and I think Sam deserves better). There's a nice little dance around her relations with her family where either said family are being unreasonable expecting her to spend more time with dying dad while she has a big case on, or Sam is, rather deliberately, choosing not to seek approval to step back from the case which she reasonably could do. Or maybe both. At any rate it may be easier for her to throw herself heart and soul into avenging one (deliberate and avoidable) killing than to have to face up to the slow and lingering (but unavoidable) death of her father.
Whatever, Sam doesn't have it easy here - as is usual in these stories, her author really puts her through the wringer. (One day perhaps I'll read a Sam Shephard story where she is happy and relaxed and then I'll know that Symon has been kidnapped and is trying to get a message out via her books).
Recommended, where you've read this series before or not (but if you haven't, you should).
For more information about Bound, see the Orenda website here. You can also purchase the book there either as paperback or e, or you can get it form your local bookshop, or online from Bookshop, Hive Books, Blackwell's, Foyles, WH Smith, Waterstones or Amazon.
The blog tour also continues - don't miss any of the great stops, which you can see on the poster below. 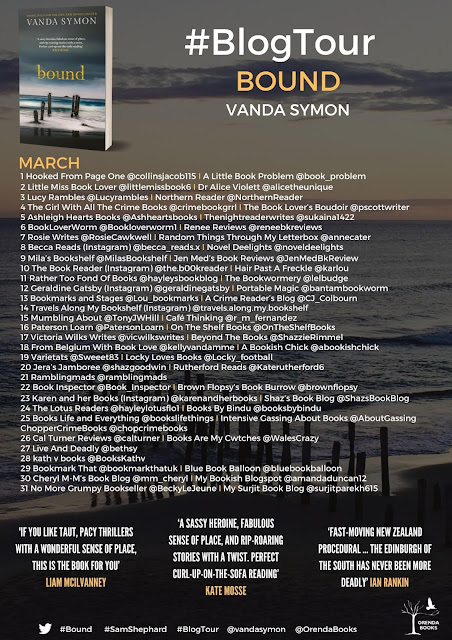