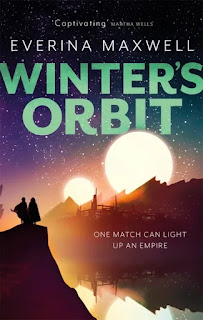 Winter's Orbit
Everina Maxwell (@Av_Stories)
Orbit, 4 February 2021
Available as: PB, 428pp, audio, e
Source: Proof kindly provided by Orbit
ISBN: 9780356515885
I'm so pleased to be joining the blogtour for Winter's Orbit and so
grateful to the publisher and to Tracy at Compulsive Readers for a copy of the book to consider for review.
Winter's Orbit is several things. It's a well-imagined space opera, with a tense military situation, political intrigue - and a hard deadline. It has a mystery at its core: a death which hasn't been satisfactorily explained. It's the story of a relationship, beginning in very difficult circumstances and whose direction will shape the course of wider events.
And it's a well-written and absorbing, character-led SF novel.
Prince Kiem and Count Jainan are very different men. Kiem is sociable, impulsive and used to being in the public eye. One of many minor members of the Imperial family, he has too little to do and is prone to landing in scrapes that bring unwelcome publicity in the newslogs. Kiem says what he thinks - and repents at leisure.
Jainan, an engineer by profession, is a widower whose husband, Taam, recently died in an accident. Jainan's a very private man, driven by duty, and finds it hard to express his feelings. It's a surprise when the Emperor decrees that the two will be married - in haste, to satisfy urgent political expediency. Neither of them is very happy, but in these circles you don't say "no" to the Emperor, you make the best of it.
The first third of the book follows the consequences of this match, seen from both mens' points of view  but not revealing too much about their backgrounds. (And neither will I, because there are things there that need to come out in their own good time). Politics dictates that the marriage must prosper - the two can't go through a token ceremony and then live their separate lives. So here they are, right from the start, coping with the emotional baggage of their earlier lives and knowing that one misstep could bring disaster.
It's a forced (in every sense) and stumbling relationship, a difficult time for both. This arc - a mismatched pair forced to endure one another, to find common ground, to discover how to be together - may be a familiar trope but there is a reason for that. Done well it can provide the beating emotional heart for a story. Done badly, of course, it can leave the reader cosy so it's a high-stakes way for a debut author to open her first book, but Winter's Orbit is written with such aplomb and such a depth of human insight that the choice in fully justified. Knowing what both Kiem and Jainan are thinking, we can sympathise with both (what a dilemma they are in!) while at times also feeling frustrated with their attempts to find a way through. For me, sympathy with them didn't, at first, translate into liking the two - although as the story developed (and I learned more about them) that came too.
Jainan and Kiem are not helped by there being an ongoing mystery about what happened to Taam, something Kiem takes it upon himself to investigate, leading us into a world of diplomacy (Jainan is, effectively, a hostage provided by a vassal planet), radical student unrest, classified military projects - and secrets. This is an absorbing web, set against the background of treaty negotiations with a powerful alien civilisation. Kiem's and Jainan's status is central to the validity of all this, so they don't have the option of sitting it out, yet if the talks break down, the Empire is doomed so they can't afford any mistakes.
I think the balance between these two themes - the politicking and the evolving relationship between Jainan and Kiem - was just about right. I suspect most readers will care more about the latter, and less about the precise details of the balance of power which are important is setting up the whole situation. Yet the two strands can't be separated so easily. There are others here, too, with interests in the treaty outcome, and unless they get what they want, Jainan and Kiem may suffer.
Overall, I felt this was an assured and readable debut novel. Jainan and Kiem really step off the page and their world is fascinating.  I will be interested to see what Maxwell comes up with next - whether that is more in this universe (there is a lot to be explored) or something different.
For more information about the book, see the publisher's website here - and take a look at the stops on the tour (see the poster below!)
You can buy Winter's Orbit From your local bookshop, if they're currently doing click and collect or you can order online from UK Bookshop dot org or Hive Books, from Blackwell's, Foyle's, WH Smith, Waterstones or Amazon. 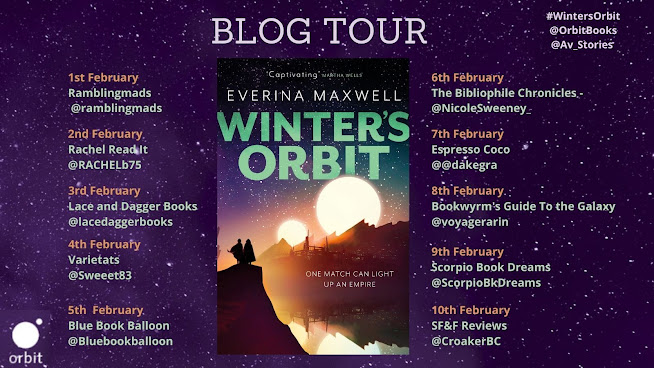