#Review - The Library of the Dead by T L Huchu 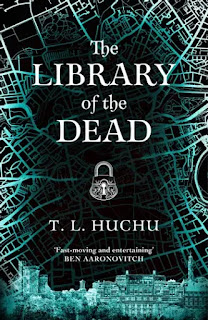 I'm grateful to the publisher for an advance copy of The Library of the Dead to consider for review.

This book has already received a lot of attention and praise, so came bearing some expectations - but, reader, I have to say that for me, it surpassed them.

I should declare an interest. I spent eight happy years at university in Edinburgh last century, so I'm always a sucker for a book that takes me in and out the wynds of the Old Town. I slogged up and down the tenement stairs of the Southside in the '87 and '92 elections, and used to cycle out to the west to visit friends, so it was all familiar... up to a factor of being set in a near-future, economically (and environmentally?) devastated nation bedecked with camps full of homeless - where if you don't use the greeting "God save the King!" you may be assessed as a malcontent.

Oh, and a world with actual, accepted, and working magic.

A little bit different from my experience, then, but this is a world that T L Huchu makes so vividly real that by the end I was more than half convinced that Ropa, his main character, had been somewhere just round the corner all my time in Edinburgh. It's not just the attention to detail, the sketched background where we don't know everything but we can see the picture, or the plausible inhabitants of this city. No, it's something very subtle in the positioning of this world. There has been a fall of some kind. It's referred to once or twice as the "catastrophe" but we're not told exactly what it was. Clearly the country has been impoverished, and many are suffering, but we're not talking about scavengers living of the corpse of civilisation. Nor about a future world doing very well, but with magic. Things are on a knife edge, plenty of business being done, industry moving, but with many left out. It's all the more credible for the threads of continuity between our world and this one, with recognisable traces of our more cosy lives and characters who remember, for example, when healthcare was free.

Against this background, Ropa, who is 15 or 16 and who dropped out of school so she could earn money to take care of her family (grandmother, sister), acts as a go-between for the recently deceased, carrying their messages to living families. There's money to be made, but also risks in moving round the city after dark and a palpable sense that one wrong step could lead to all three losing their slender security, living in a caravan in "His Majesty's Slum". The contrast between that sense of vulnerability, and the warmth of Ropa's relationship with her gran and sister Izwe (where is everybody else?) is another compelling feature of the book, as is the contrast between Ropa's and her gran's Zimbabwe-inflected magic and the slightly dour atmosphere of Edinburgh itself. (Towards the start of the book, Ropa settles a historic haunting - strictly outside the terms of her licence as a ghsottalker, but a girl's gotta eat - and the unfortunate restless spirit insists that a proper, Presbyterian Minister attend to give him rest, definitely not a florid Episcopalian priest).

All is, kind of, in balance until Ropa is approached for help (pro bono work, but what can you do?) by the ghost of a young mother whose son has gone missing. She can't be at peace until he's found. Investigating this leads Ropa into a darker world than we have seen yet, and this is where Huchu's positioning of the near future as unpleasant, but not hellish, really pays off, because the things that Ropa discovers puts a rather different spin on that. What follows is a breakneck adventure with all manner of perils and unsuspected enemies: but also, with friends and allies and, also unsuspected, sources of knowledge and power. Ropa is discovering things about her city that she previously knew nothing of.

Maybe some of this is revealed to her rather easily, and maybe - when you get to the end - you'll think that the ultimate root of the evil that is loose was a bit obvious. But equally, maybe you'll think (as I did) that Ropa's self-assured expedition into the shadows and her combination of moral and physical courage are ultimately much more important, and deserve much more attention. She is driven into some very tight places, and makes some bad mistakes, but never gives up and never loses sight of what is, after all, a mission of mercy.

And the telling of that story is glorious.

I would strongly, STRONGLY recommend this one. It's urban fantasy with all the joy and wonder boosted and a series - I hope it will be a series - that I sense is really going somewhere.

For more information about The Library of the Dead, see the publisher's website here.