#Review - The Archive of the Forgotten by AJ Hackwith 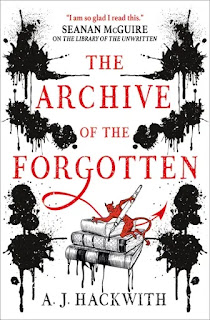 'Every book is a secret that only readers know'

I'm grateful to Titan Books for an advance e-copy of The Archive of the Forgotten to consider for review.

In this sequel to The Library of the Unwritten, all is not well in Hell's Library (maybe it's a tautology to say that, this is Hell, after all!)

At the end of the previous book (spoilers) Claire, the Librarian of the Unwritten Wing, which stores all unwritten books, was ejected from her post and instead took over in the Arcane Wing (cursed artifacts). There was bad feeling against Claire because of her past behaviour and in particular, the strictness with which she'd treated escaped characters.

That backstory was possibly more significant and important than I'd realised - perhaps overshadowed in The Library of the Unwritten which was after all largely focussed on the attempted seizure of the Unwritten Wing by an ambitious demon - with the result that, at the start of the current book, things seemed to me to be unexpectedly fraught. Claire hasn't spoken for months to Brevity, muse and her former apprentice, who is now Librarian. Fallen angel Rami and escaped character Hero - whose hate-hate relationship is one of the delights of this story - maintain a sort of détente but this story is freighted with things not said, painful silences and - not misunderstandings, so much as deliberate attempts not to have to understand ('Claire was very skilled at finding the most efficient ways to hurt herself'). It's not helped by the arrival of muse Probity, Brev's oldest friend, who loathes Claire with a passion. (The depth of this is something that I never completely understood in the book, even granted Claire's previous behaviour).

It's a much more character-driven, intimate piece than the previous book. That basically featured a war (with mass casualties) and ranged widely, Claire & Co visiting Earth and having protracted adventures here. In contrast, the action in The Archive of the Forgotten most takes place in there two Wings of the Library (Rami and Hero do make an excursion to the previously unknown Archive of the Unsaid, which exists in an Ancient Greece sort of plane. It's an enjoyable episode and gives us more information about how the different planes or "Realms" fit together, deriving, as they do, form quite different cosmologies, but very much an out-and-back trip and isolated from the main action). Development of the plot rests on (mainly) Claire and Brevity gradually evolving and exploring their differences and their understanding of this world's metaphysics. This process is driven by the arrival of a mysterious pool of ink, deriving in some way from the fire that destroyed so many books in The Archive of the Forgotten.

The ink is both a threat and, for some, an opportunity. It is vitally important to understand it. That sends Rami and Hero off on their quest. It also leads Claire to brood over the cryptic log entries left by previous Librarians, and to some frankly hair-raising experiments (nobody here has much enthusiasm for risk assessment). And eventually, it raises existential questions about the Library and its Wings, the nature of the books, and the place of Claire and the others in everything.

I enjoyed this book, but it's one sequel where you do need to have read the previous book first, not only for the establishing information (as I've said, that is perhaps farther backgrounded) but to appreciate the characters, and especially Rami and Hero who have already experienced a lot of growth and change and will see a lot more in this book. In fact I think their parts of the story - both their rather quixotic expedition and events afterwards - were my favourites, leading to something I'd not expected at all. I think that relationship may see further change in future books and perhaps be at the heart of unravelling the continuing central mystery here.

So, great fun, with all the pithy observations ('Not even death stops the world from expecting a woman to take care of things') and humour of the Library, as well as some very sharp writing ('Claire was not-crying, not-panicking, not-self-loathing', 'The world became oblivion and black teeth'). I am already impatient for the next volume!