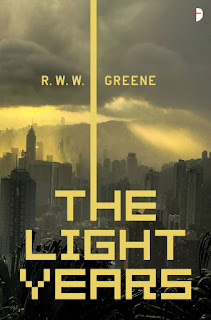 I'm grateful to the publisher for providing a free advance e-copy of this book via NetGalley.

The Light Years is a slightly different take on science fiction. Focussing on two central characters, Hisako Saski and Adem Sadiq, who are contracted by their parents to marry. The twist is that while Adem, a young man in his 20s, is aware of the deal (even if he didn't actually seek it), Hisako isn't even born yet.

What evens things up is special relativity. Adem's family make their living aboard a trader starship, able to travel every close to the speed of light. A few months spent aboard for him is equivalent to ten or twenty years for those left behind. This is the truth of relativity, a branch of physics often conveniently ignored in SF. Here, it's a cornerstone of the plot. For Adem and Hisako, it means that by the time he's returned from his latest trip, she has been born, gone through childhood, adolescence, taken her degree at university, fallen in and out of love, formed a band (and left it) and much more.

And she's learned what her contracted fate is. She must marry Adem - the bargain ensuring life, she would have literally been illegal otherwise under the strict birth control laws of her homeward - and remain married for two years. There are no other obligations, yet understandably, Hisako resents Adem and she resents the choices her parents made on her behalf.

On the whole, Greene explores this situation - for both Adem and Hisako - with tact and empathy, allowing his characters to breathe and to drive what subsequently happens. Portraying Hisako is more difficult, obviously, because the book covers more than 20 years of her life and they are turbulent years, years of development and change. Understandably, not a great deal happens to Adem in the few months of his life before the wedding. It's frustrating that Hisako's life over the corresponding period has to be represented by individual episodes showing her as a young girl, at high school, and then as a somewhat stroppy teenager. These scenes have to do a great deal of work in showing Hisako grow up and I was impressed that Greene manages to do this so well given the am out that couldn't be shown. It would have been perfectly reasonable to give Hisako a whole book and Adem a few pages at the end, really.

Another main theme here is the unequal, far-future society in which Hisako, Adem and their parents live. There are stark disparities between rich and poor, no sign of democracy and many unregistered, indeed illegal, "refugees" who, if they are lucky, end up in shanty towns such as "la Merde", if unlucky, frozen forever in stasis posts or trafficked virtually as slaves. It becomes clear that these "refugees", like everybody else, have fled Earth before it was destroyed in a solar flare, sealed I those pods. The fortunes of humanity depended very much on who arrived first and who arrived where - this, of course, being influenced by their position and wealth n the first place. They result is a society scattered across several planets where a war of all against all is vigorously fought.

Key to the future of the remaining colonies is the most technology of Earth, embodied in the ancient starships, various drifting wrecks and in scattered instances of the dead cultures and societies that created it. The goal of many - including Adem's parents - is to get themselves a piece of that knowledge. That part of the plot didn't, for me, motivate quite so much as the simple, touching plight of the two young people and their need to navigate their complex society.

This is a refreshingly intelligent SF story, with few bangs and zaps (indeed the only real section of combat occurs in an immersive simulation which Hisako plays - learning as she does how much propaganda and hate there is against the inhabitants of "la Merde"). Rather, problems are solved by courage, intelligence and negotiation, the chief obstacles being lack of trust and lack of knowledge.

Its perhaps then not for everyone but I found it an excellent read and once I began, it pretty much didn't leave my hands till I was finished.